George Pataki Heavily Hints 2016 Run, Even Though ‘People Don’t Remember Who I Am’
video

George Pataki Heavily Hints 2016 Run, Even Though ‘People Don’t Remember Who I Am’ 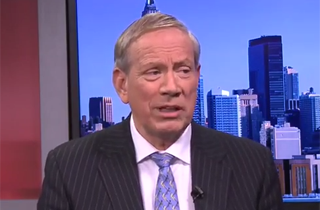 Former New York governor George Pataki (R-NY) hinted (if not “wink-winked”) today that he will probably enter the 2016 GOP presidential primaries after nearly nine years out of the public spotlight.

“Who else is running doesn’t affect what we do, but we have taken the first step, which is creating a super PAC,” Pataki, who left office in 2006 and went into the private sector, told Steve Malzberg, adding that while “I can’t say that I will be a candidate,” he plans on going to New Hampshire to stump, which means yeah, he’s gonna go for it.

So why are you now coming back to be a thing, nine years after you left office?

Watch below via Newsmax: