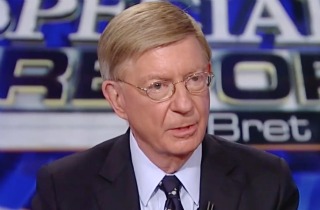 Washington Post conservative columnist and Fox News contributor George Will rebuked a handful of GOP presidential candidates Thursday for screwing the pooch in their responses to the Supreme Court’s establishment of same-sex marriage as a constitutional right — a surprising argument from a culturally conservative author who rarely misses a sip of sad scotch over America’s moral decline.

“Sixteen months before the election, some candidates are becoming too unhinged to be plausible as conservative presidents,” Will wrote.

While making sure to call “conservative wariness” over evolving interpretations of constitutional language “wise,” Will nonetheless advised Republicans to be allow the chief justices to be amenable to cultural updates.

In other words, maybe not so much with the flurry of constitutional amendments against gay marriage, floated by a couple of candidates, or proposals to completely alter the entire judicial branch by making Supreme Court justice an elected position, as not-serious candidate Ted Cruz (R-TX) has suggested.

Will was especially dismayed at this last suggestion, which he said linked Cruz to the progressivism of Teddy Roosevelt:

It is, therefore, especially disheartening that Cruz, who clerked for Chief Justice William Rehnquist and who is better equipped by education and experience to think clearly about courts, proposes curing what he considers this court’s political behavior by turning the court into a third political branch. Imagine campaigns conducted by justices. What would remain of the court’s prestige and hence its power to stand athwart rampant executives and overbearing congressional majorities?

If Will defends single mothers next week, someone will have to check his oatmeal.