Unfortunately, that hobo from David Letterman‘s final Late Show, Jim Carrey, didn’t delete his Twitter account after ranting against California Gov. Jerry Brown (D) and the state’s recent pro-vaccine legislation. In fact, the two eye-rolling tweets that initially caught everyone’s attention are still there — along with a few other gems.

However, one tweet Carrey issued has been altered after the fact, mainly because of the image it used. It included a photo of Alex Echols, a 14-year-old resident of Eugene, Ore. who suffers from tuberous sclerosis and autism. Carrey chose to grab the photo at random from the Internet and publish it with his anti-vaccination spiel: 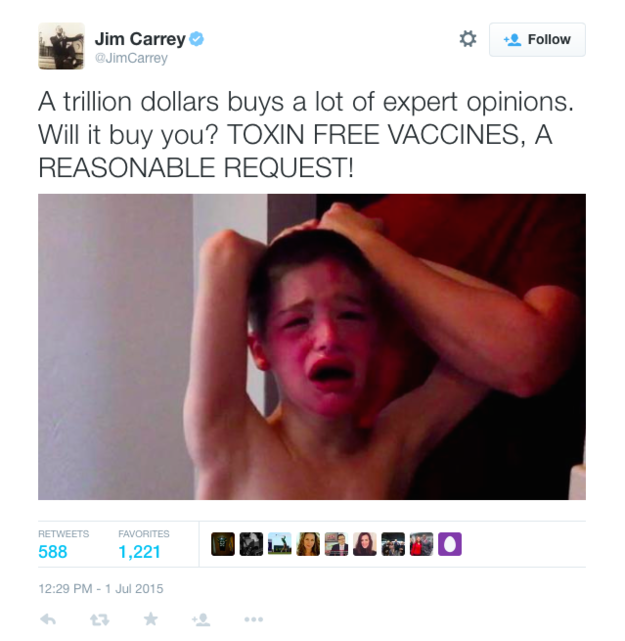 The thing is, whether or not Alex’s case has anything remotely to do with vaccinations (as many anti-vaxxers on Twitter have already argued), the photo was used without permission. And BuzzFeed’s Virginia Hughes, that made Alex’s mother, Karen Echols, angry enough to create a Twitter account and tweet at Carrey, demanding that he remove the image at once.

Share this one please: Facebook, Tumblr, and Instagram friends, I need your help. Jim Carrey (yes that one) tweeted out an image of my nephew who suffers from Autism and tuberous sclerosis as an example of anti-vaccinations. Alex had these conditions before he was ever vaccinated. I’m very disgusted and sickened that a celebrity would use a photo like this that was used in the first place to spread awareness of Tuberous Sclerosis to mock him and and my sister for vaccinations. Even if that was not his intended outcome, it is what happened. Please spread this, and let’s try to get this tweet removed. #vaccines #california #californialaw #californiavaccinationlaw #jimcarey #vaccination #vaccinations #privacy #privacyrights #factcheck

Carrey’s tweet is still online, though the media attached to it has been removed due to a copyright complaint Echols filed with Twitter.