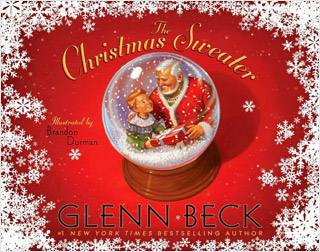 In the wake of his last New York Times #1 bestseller, “Arguing With Idiots,” way back a couple weeks ago, Beck’s new Children’s book, “The Christmas Sweater,” reached #1 on the NYT list this week.

This makes it five consecutive publications to debut at #1 on the NYT bestsellers lists. His publisher believes he has made history. From the release:

Beck’s publishing house, Simon & Schuster, believes that Beck has become the only author in history to ever have #1 New York Times bestsellers debut on these four different lists: hardcover fiction (The Christmas Sweater), hardcover nonfiction (Arguing with Idiots and An Inconvenient Book), nonfiction paperback (Glenn Beck’s Common Sense), and now with The Christmas Sweater: A Picture Book, children’s picture books.

And some of these books by Beck are still hanging around their respective NYT lists. “Arguing with Idiots” is #5 on the hardcover nonfiction list in its 6th week and “Common Sense” is #8 on the paperback nonfiction list. It was released June 16 and has currently sold more than 1 million copies. At this point Beck could release a collection of drawings from his chalkboard and it would hit #1.

As for the next time you’ll see Beck on TV or radio, he tweeted today that he’s slated to be back tomorrow. We’re sure he’s got a lot to say in the week he’s been off air.