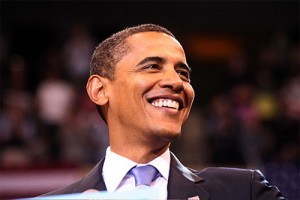 In the midst of his yearend push to pass sweeping health reform legislation, the last thing President Obama needs is another dustup with the tea party set. Is it possible that he referred to them as “teabag” people in discussions with House Democrats?

Mr. Obama, during his private pep talk to Democrats, recognized Mr. Owens election and then posed a question to the other lawmakers. According to Representative Earl Blumenauer of Oregon, who supports the health care bill, the president asked, “Does anybody think that the teabag, anti-government people are going to support them if they bring down health care? All it will do is confuse and dispirit” Democratic voters “and it will encourage the extremists.” (emphasis added)

The quote should be taken with a few large grains of salt before one draws any conclusions about President Obama: it is, after all, “according to Representative Earl Blumenauer,” and could be a paraphrase rather than a direct quote.

Still, the quote’s emergence is a sign of the powerful information-sifting capabilities of the social web: even though the offending word “teabag” appeared two thirds of the way into a wonky post on a fairly obscure NYT blog, it’s already starting to bubble up on social aggregator sites like Digg and Reddit. This, in turn, highlights the dark side of these sites, which sometimes tend towards sensationalism and a herd mentality: a Digg headline falsely claims that “Obama uses the word ‘teabagger’ to describe the opposition.”

It’s possible that an older fellow like Earl Blumenauer could naively use the phrase ‘teabag’ without realizing its explosive connotations — which is why the question of who said what and who paraphrased what is so crucial.

It’s a question worth asking whether the New York Times deliberately buried the lede on this one, out of genteelness or whatever other motivation. By now, anyone who has been seriously following the tea party movement should know that a lot of people out there are greatly offended by the phrases “teabag” and “teabagger,” given their sexual connotations (cf. Urban Dictionary).

Yes, Obama’s healthcare pitch to lawmakers is important to the public debate, but in today’s political climate, the possibility that Obama used the word “teabag” in conversation with Democratic lawmakers is a story of its own, not a noted-in-the-third-paragraph-with-no-followup story. At the same time, it’s possible that an older fellow like Earl Blumenauer could naively use the phrase ‘teabag’ without realizing its explosive connotations — which is why the question of who said what and who paraphrased what is so crucial.

Update: Representative Blumenauer’s communications director tells Mediaite that Blumenauer was paraphrasing. “Congressman Blumenauer was simply summarizing in his own words the President’s remarks following the caucus meeting,” she said in an email.