Glenn Beck Premieres: ‘GBTV, Where We Can Proudly Say That We Are Very Different From Al Jazeera’ 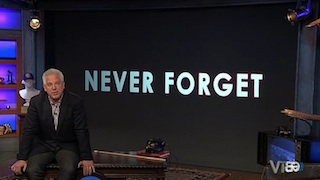 Yes, today marked the official premiere of Glenn Beck, the new talk show hosted on the online-only GBTV. The chalkboard’s still there. The tears were still there. Heck, even the Goldline ads were still there. So what’s the difference now that we’re flipping on Beck with the click of a mouse instead of a remote?

Well, the biggest difference is obvious. Or should I say the “longest difference?” The show is two hours, double the length of his Fox News show. Because of this change, the program has taken a necessary step in bumping up the amount of contributors. Don’t get me wrong. Beck is still the star and 80% of the words coming out of the computer’s speakers were spoken by him, however, there are now full news headlines delivered by The Blaze’s Amy Holmes, jokes from Brian Sack (who I was glad to see kept the “B. S. of A” title), and a full segment from Eric Stakelbeck on disproving the narrative that Muslims have been oppressed by American Islamophobes in the past decade (Did you know there were 12,000 mosques in the country on 9/11 and now there are 2,000! That’s more mosques! Oppressed my ass).

The Stakelbeck appearance only adds to something I began feeling more and more as the show wore on. Over the past few months, we’ve wondered what exactly Beck was making in those shiny new offices. I’ve said that the distribution ideas put him on the forefront of media innovation, but what was the actual content going to be? As the program continued, it felt less like one opinion show during a night of programming and more like what it is, the centerpiece of an entire network, a conservative and religious network. A half hour in, I thought to myself, “My God, Beck’s created his own 700 Club!”

But this discussion of the differences shouldn’t distract from just how familiar most everything was. All in all, this was pretty much the show Beck left a few months ago only bigger and shinier. Even the font on the bumpers looked the same. And there were some of the same advertisers as well (It should be noted here, as Beck made a point to stress it, that the show has no sponsors except the subscribers. The commercials were for companies that had “underwritten” content and, therefore, would have no say on anything editorial because, as Beck put it, he’s “beholden to no one.”). 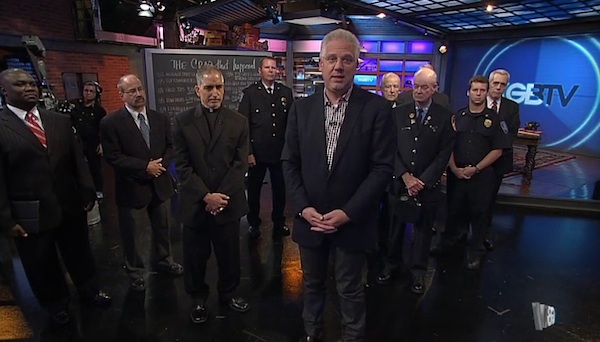 Now, when I say that the show looked just like his old show, I also meant that as a compliment to all of the technical aspects. If there’s one thing I can say, this certainly didn’t look like a “web series.” The set was huge and filled with all sorts of flashing technical doo-dads (including, yes, the three-sided chalk board). And while there were a few hiccups (the staging of a segment involving a number of 9/11 first responders was awkward, Holmes looked a little uncomfortable when the cameras kept her in frame during the first clip she threw to, and the show kept doing this weird split screen thing that seemed unnecessary), there were no more than any other live TV show. 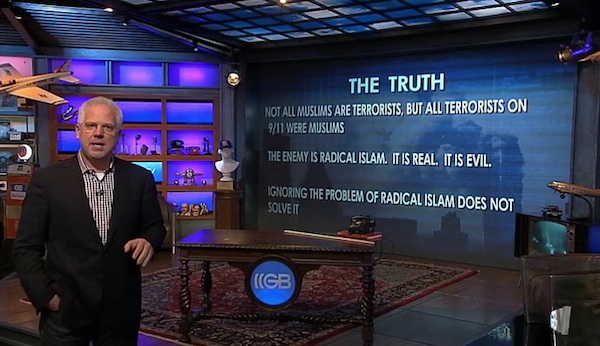 So, what did Beck talk about? Well, much of the show focused on 9/11 and Muslims. Beck was apparently furious with the handling of the 9/11 anniversary proceedings yesterday, going so far as to say that they had “tainted” the entire memorial. He was furious that first responders and clergy weren’t invited as well as that the memorial lights only shone for a brief amount of time (“Were the lights too bright for the offices of CAIR?”). And there was an entire segment on the difference between “good Muslims” and “bad Muslims.” There was a whole lot of Muslim talk as well as history lessons you can “only get here” and dissing of the mainstream media. Beck even went so far as to claim that the networks refused to show actual footage of the Towers falling.

Um…did he watch any TV this weekend?

Anyway, it was typical Glenn Beck. So, if that’s what you’ve been missing, here it is. Only time will tell if this huge gamble for Beck will pay off.

Watch a clip from the premiere below: