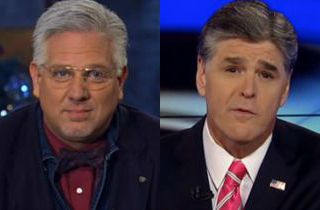 “I get it if you are tired of politicians, a republican progressive, or you are only about winning,” Beck added. “Perhaps you are angry and you just want to make someone pay or just want something done and you don’t care how it gets done, but what PRINCIPLES does he have that they are attracted to?”

“I really want to understand,” Beck wrote, before listing off the ways in which Trump makes him recoil:

[H]e said he identifies his “policies more as a democrat”; he makes President Obama look truly humble; he was very pro abortion until very recently; he still says “don’t defund planned parenthood”; he is pro “assault weapon ban”; he is in favor of a wealth tax that would just “take money out of people’s bank accounts”; he is for boots on the ground in Iraq and ‘taking the oil’ from the Iraqi people; he is a progressive ‘republican’; he says single payer health care works; he said he would give people more than just Obama care; the First Lady would be the first to have posed nude in lesbian porno shots; he said that he keeps all the bibles he is given in a “special place” out side the city – and he only goes to church on Christmas and Easter; he is generally not a likable guy; he has around 16% favorability with Hispanics and he has gone bankrupt 4 times.

Regarding Coulter, Hannity, et al, Beck continued: “These are smart people. What am I missing? Just based on his favorability ratings he could never win in a general.”

And perhaps sensing the likelihood of angry responses from “cuckservative”-wielding Trump fans, Beck pleaded for a “respectful dialogue,” and cautioned that “I am not trying to tear him down, I am stating my opinion. Can we actually have a civil discourse based on facts? Not on emotion or feelings.”