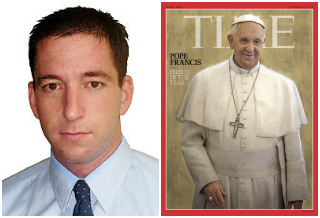 When TIME Magazine picked Pope Francis I as their 2013 Person of the Year, they not only spurned their own reader poll (winner Abdel Fattah el-Sisi and runner up Recep Tayyip Erdoğan didn’t even crack the top ten, though third place finisher Miley Cyrus did), they also pissed off a lot Edward Snowden supporters. None more so than The Guardian’s Glenn Greenwald.

He also took a shot at the magazine by posting a link to a classic video from The Onion announcing “TIME Advanced,” a new version aimed at adults:

To understand TIME Magazine, just watch this video from the Onion http://t.co/KuwV77S7nQ

Greenwald did seem to appreciate TIME’s Michael Scherer, who wrote the article about “runner up” Snowden:

TIME's @michaelscherer: Snowden's "gambit has so far proved more successful than he reasonably could have hoped" http://t.co/Hxq48AQZN9

Greenwald was joined by a wide swath of journalists, who also questioned why Snowden was merely named “runner up”:

Some will see Time's choice as a snub of Edward Snowden, reviving talk about how the mainstream press has treated Snowden and @ggreenwald.

Snowden would've been a smarter move for Time

Edward Snowden, and not Pope Francis, should have been Time's Person of the Year http://t.co/wm5b2Oc14v

No Ed Snowden? Yeah, Pope’s been interesting, but is he really most fascinating person of year? Once again, fear. pic.twitter.com/mcHY3bDKtu

I would've made #Snowden Person of the Year and short-listed Francis for person of the Century. #LongGame

I would've chose Snowden over the Pope. Not a value judgment by any means, but Snowden's impact is likely just begun.

Time chose Pope Francis, but Snowden is @TheSwitch's Person of the Year. No one impacted the news more than him. http://t.co/Amfm4V0QpO

Nobody asked but I would pick #Snowden for all that he revealed about our gov't. But hard to argue with @Pontifex (literally) #TIMEPOY

The Pope is @TIME Person of the Year. Fair enough I guess. Still would have gone for Snowden myself, but meh.

No question the Pope is an important figure. But also no question that no one affected global events this year as much as Edward Snowden.