Good To Know: The US Government Officially Declared That The X-Men Aren’t Human 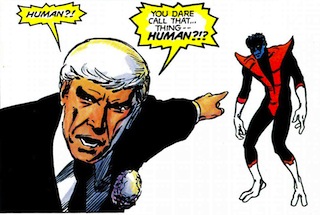 Well, here is the most amazing story I’d never heard. Did you know that the United States government has officially declared that Marvel mutants like the X-Men aren’t really humans. It’s true.

Now, I know what you’re asking. Why on earth did the government waste their time talking about mutants? Is there something we don’t know? Are pubescent kids around the country suddenly developing extraordinary powers that all strangely seem to be puns on their names in some way? Sorry, that’s not the reason. Well, at least, not that I know of. No, you probably won’t be surprised to know that the official ruling was made for one clear reason; money.

RELATED: Prepare For The ‘Outrage’: Archie Comics To Feature A Gay Wedding

Yes, it turns out that, back in 2003, the United States Court of International Trade ruled that Marvel super heroes were not actually human. Marvel lawyers had filed the appeal because they realized they could pay less tax money to import and export action figures if that was the case. That’s because some strange legal loophole charges more taxes for “dolls” than for “toys,” and the legal definition of a “doll” is any toy that represents a human being. Thus, declare that Wolverine isn’t human and you can pay less money.

The whole story was detailed in a Fox News report by Garrett Tenney and it’s genuinely pretty fascinating. Not only is it another look into our very strange tax system, it’s also interesting to know that after years of fighting for equality, the X-Men’s true enemies keeping them separate from us humans are their own creators.

Man, no one tell Magneto.