GOP Report Concludes Military Could Not Have Changed Outcome in Benghazi

GOP Report Concludes Military Could Not Have Changed Outcome in Benghazi 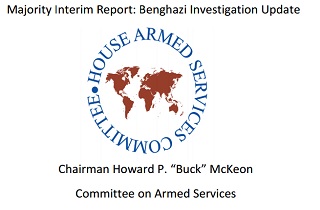 The attack on the U.S. diplomatic post in Benghazi, Libya that left four Americans dead, including Ambassador Chris Stevens, continues to be a line of political attack against the Obama administration, but a new report from the Republican-led House Armed Services Committee belies at least one aspect of the popular conservative criticism, that U.S. forces were ordered to “stand down” when they could have saved lives in Benghazi.

The Republican-authored report’s findings are, by no means, a love letter to President Obama or then-Secretary of State Hillary Clinton. For example, the report concludes that U.S. personnel in Benghazi were woefully vulnerable in September 2012 because a) the administration did not direct a change in military force posture; b) there was no intelligence of a specific “imminent” threat in Libya; and c) the Department of State, which has primary responsibility for diplomatic security, favored a reduction of Department of Defense security personnel in Libya before the attack.”

The balance of the report contains many such harsh judgments of the Obama administration, the State Department, and the intelligence community.

However, as ThinkProgress notes, the report does undermine a key spoke in conservative talking points about Benghazi:

As Media Matters reports, Fox News cited reports of a stand-down order no fewer than 85 times during prime-time segments as of June 2013. As the new report — which the Republican majority of the committee authored –makes very clear in its findings, however, no such order ever existed. “There was no ‘stand down’ order issued to U.S. military personnel in Tripoli who sought to join the fight in Benghazi,” the report says, noting that the military was not positioned to respond to the attack.

“Given the military’s preparations on September 11, 2012, majority members have not yet discerned any response alternatives that could have likely changed the outcome of the Benghazi attack,” the report concludes.