GOP Staffer Gets Testy with Reporter: ‘When Did You Stop Beating Your Wife?’

GOP Staffer Gets Testy with Reporter: ‘When Did You Stop Beating Your Wife?’ 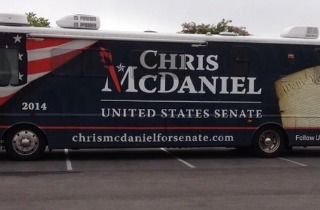 The Chris McDaniel Mississippi campaign is once again under scrutiny, this time over an FEC filing showing their ties to a group they previously denied involvement with. And a McDaniel staffer got pretty angry when talking to a reporter about the subject, and things escalated quickly.

The McDaniel campaign reported roughly $11,000 in disbursements to the Liberty Action Center, listed as rental and catering services, which the LAC does not provide. And additionally, the LAC called voters weeks ago asking if they’d support a legal challenge to the Republican runoff race that gave Senator Thad Cochran a win over McDaniel.

Clarion-Ledger reporter Sam R. Hall spoke with McDaniel communications director Noel Fritsch about the FEC filing. (We should note here that Hall previously worked as executive director of the Mississippi Democratic Party.) Fritsch said it must have been an error, and said all they worked with the LAC on was email.

But when Hall persisted, that’s when Fritsch got very agitated. He told Hall, “I don’t accept the premise of your question,” took a shot at the trustworthiness of his reporting, and then dredged this up out of nowhere.

Fritsch then said, “Off the record, when did you stop beating your wife?”

When I asked him what the hell he was talking about, he repeated the refrain, “I don’t accept the premise of your questions about those calls.” (For the record, I’ve never beaten my wife. She could probably take me, anyway.)

Hall adds that later in the call, Fritsch got so upset he “yelled something angrily that I couldn’t understand and then hung up.”