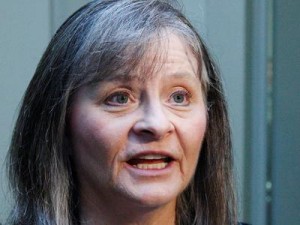 Oklahoma State Rep. Sally Kern (R-84) recently defended remarks she made in 2008 that homosexuality was a bigger threat than terrorism or Islam…by explaining that homosexuality is more dangerous than terrorist attacks. While Kern’s explanation is even more outrageous than her original remarks, it does have one thing going for it. It’s the perfect basis for the next Republican debate “show of hands” question.

In an interview with anti-gay activist Peter LaBarbera, Kern sought to explain the remarks that led her to write the book she’s promoting, The Stoning of Sally Kern: (transcript via Right Wing Watch)

You know if you just look at it in practical terms, which has destroyed and ended the life of more people? Terrorism attack here in America or HIV/AIDS? In the last twenty years, fifteen to twenty years, we’ve had maybe three terrorist attacks on our soil with a little over 5,000 people regrettably losing their lives. In the same time frame, there have been hundreds of thousands who have died because of having AIDS. So which one’s the biggest threat? And you know, every day our young people, adults too, but especially our young people, are bombarded at school, in movies, in music, on TV, in the mall, in magazines, they’re bombarded with ‘homosexuality is normal and natural.’ It’s something they have to deal with every day. Fortunately we don’t have to deal with a terrorist attack every day, and that’s what I mean. It’s more dangerous, and yes I think that it’s also more dangerous because it will tear down the moral fiber of this nation.

ThinkProgress goes over the many reasons these remarks are reprehensible, and when I first saw their item, a few other things occurred to me. First, I thought (as others might), “‘Well, it’s a state legislator, there’s a higher bar for crazy.”

Then again, how far does Kerns’ opinion really stray from those of Republican candidates for president? No one has asked (yet) for a show of hands from them on the issue of what’s more dangerous, terrorism or homosexuality, and while I would be surprised to see any of them agree, I was also very surprised to see almost every one of them support a Constitutional ban on gay marriage. While none probably believe that homosexuality is worse than terrorism, I’d be interested to see how they think that calculation would play in the minds of their base.

The other thing I thought of was the threat that Kern seems to be woefully unprepared for: what if terrorists got ahold of one of those gay bombs the military was looking into a few years ago? If Sally Kern took the title of her book a little more figuratively, she’d have probably already thought of that.

Finally, I’m always amazed at the quaint notion that teaching tolerance of homosexuality in schools is somehow going to be the tipping point for kids to gay it up when they get older. Half of the stuff they actively taught me in school (the shuttle run, frog dissection, long division, short division), I never did again.