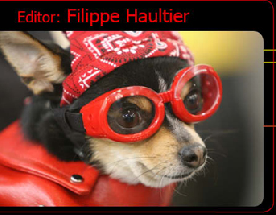 Some press releases defy commentary. This release about a sexy celebrity pet magazine written by dogs in Australia, excerpted below, is one of them:

…So luxurious it might even seem unreal, ‘Woof’ takes a hilarious look at the life of the upper crust of the dog and cat world. Written by dogs, for dogs, cats and their loving owners, the first edition of the magazine features a photo spread about the recent wedding of Helen MeGeneros and Porche le Rosti, plus interviews with the Queen’s corgis, Lono, star barker of the band me-2, not to mention heaps of fashion features and a series of makeovers, transforming daily dogs into hot pups.

…As ever, behind Pets’ Palace’s humour lies a more serious purpose.

‘Recent figures from the USA, The 2007 US Pet Ownership and Demographic Source Book, show amazing growth in the pet market worldwide, with sales of pet products estimated at just under USD39 billion in the US and statistics from the UK: Saga National Survey show UKP3.9 billion in the UK,’ says Diane Costa for Pets Palace. ‘And in 2006, the Australian Companion Council estimated Australia spent over AUD4.5 billion on pet care products and services, almost 60% of which was on dogs’…

…some dogs and cats, puppies and kittens may struggle to read the text of the articles. But it’s a hilarious treat for every dog owner – with an added bonus.

‘Woof’ can be seen at the following link: http://www.petspalace.com.au/woof-magazine/index.shtml

About Pets Palace: Pets Palace Australia is an online pet products store which promotes lifestyle and luxury for your pet and also offers a range of designer dog clothes and accessories for both dogs and cats.