Greg Gutfeld Speaks About Unspeakable Truths: “Generally, Everybody Else In The Media Can Suck It” 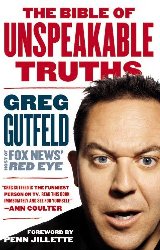 Red Eye host Greg Gutfeld‘s new book was released last week, and as the title indicates, it’s his bible of the “unspeakable truths” fans of the Fox News show have grown accustomed to.

With chapters devoted to everyone from Paris Hilton to David Beckham Gutfeld’s barbs spare practically no one – and that includes the left and the right, politically. We talked to Gutfeld last week about why he doesn’t drunk-host, plans for a potential children’s book, his hatred for Twitter (although he uses it) and more.

Mediaite: There’s a lot of focus on the media in the book – it’s one of the biggest chapters. And I’d say Katie Couric specifically, is a target. What is it about TV news or Couric that seems to bother you the most?

Gutfeld: In that chapter I wrote about Virginia Tech, and it just occurred to me that none of these schools had any protection, but when you look at any big building in New York or big media centers in Atlanta, they have incredible levels of security. Everybody is well-armed. You can’t harm anybody because you’ll get shot. I thought, a lot of these people are for gun control. But they’re for gun control from the safety of their well-protected office. So why are their lives more important than the college mascot or cheerleader? If there’s going to be guys with guns around the Fox News building or CNN building or whatever building, there should be the same level of security around a college campus to protect students from madmen.

Mediaite: You’ve got a whole list of these ‘media assjackets’ as you call them. It seems it’s the ego of these people that bring out your criticism.

Gutfeld. Yeah, I was a magazine guy. And I think that magazine people are more pretentious, more self-involved. Their jobs are easier than people who work in TV I think. People in publishing look down upon people in TV. They think that what they do is superficial. However people in TV have to work harder because they have to get the information out there as it happens. And you see this level of pomposity in the publishing industry because of that, when actually they only have like one deadline a month. I’m talking about the magazines that I worked at. But people in the media in general don’t have to work that hard. They don’t have to lift anything, they don’t have to drive a truck. That’s why I said in one chapter – basically every job in media can be done drunk, because you’re not going to hurt anyone. You can’t drive drunk, you can’t build a building drunk, but you can pretty much write an article drunk. The only machinery we have to deal with is an elevator and when the elevator breaks down we go crazy.

Gutfeld: Never, and I’ll tell you why. If it turns out it’s better, then what do I do? Then I become an alcoholic. I would never want to know if I’m a better host after drinking. Nothing good can come from that information.

Mediaite: It took a page-and-a-half for you to take a shot at Barry Diller (Of male models: “Seriously, is the ability to walk a straight line down a runway after a long night spent fending off Barry Diller really such a talent?”). Are you ever worried about burning any bridges?

Gutfeld: I never really think about that. If you look at my career, I don’t spend much time wondering, ‘How is this going to affect the next cocktail party?’ The only people I care about and respect are the people I work with, and the people that treat me with respect. Generally, everybody else in the media can suck it.

>>> NEXT PAGE: Why blogs are “disgusting,” plans for a children’s book, Fox News’ “plums”…