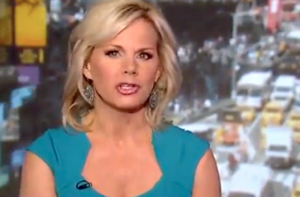 As I told you earlier, everyone is talking about #SweaterGate. It all started when KTLA’s Liberté Chan was told to put on a sweater during a live broadcast because some viewers were sending rude emails about the black dress she was wearing. Chan addressed it on her blog, the general public addressed it on Twitter, and as the afternoon wears on, more and more pundits are addressing it on TV.

First, on Fox News’ Outnumbered, the panelists seemed to all agree that the sweater thing was just a joke, which is how Chan presented it on her blog. Later, on The Real Story, Gretchen Carlson added in her opinion after pointing out that Chan has found herself in sticky situations because of her apparel before. Carlson showed footage of the time Chan wore too much green and accidentally turned herself into a walking forecast map. Then, the Fox News host shared her own experiences with negative comments on her choice in clothing:

The comments about Carlson needed to lose weight are particularly unkind, but by sharing them and reminding people that she’s been dealing with this treatment for about 25 years, she underscored the fact that what happened to Chan is not an isolated incident.

In the past, reporters have spoken out about the body-shaming they receive from viewers, but the topic has died down after a few days. Perhaps #SweaterGate and Carlson bringing up the emails she gets will launch the conversation into a higher level of permanence and we will see an end to excessive ridicule or shaming for various body types and choices in clothing.

Until then, Carlson has the best response. After musing that her almost-sleeveless dress today might make nit-picky viewers upset, she chirped, “Oh well!”

Watch above to see Carlson and her team quietly riff on Chan’s too-green dress toward the end, too.