When It Comes to Walter Cronkite Being Trustworthy Or Liberal, Cuomo, Carson Both Correct 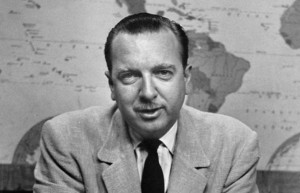 Was Walter Cronkite a liberal?

That question was debated on CNN’s New Day this morning between Ben Carson and Chris Cuomo. Carson says the answer is yes — even going so far to refer to the man affectionately referred to as Uncle Walter as being a “radical, left-wing” journalist.

So is Carson correct? Or is the 45-year-old Cuomo, who shared the following perspective?

“I remember growing up, I used to turn the TV on and see Walter Cronkite or somebody like that. And you could really trust them, later adding “I happened to know him. He was a mentor to me… He covered things from both perspectives, shading as he though appropriate. That’s the job, right?”

In this case, both Carson and Cuomo can be considered correct. The latter gets it right in that Cronkite didn’t earn the moniker, “The most trusted man in America” for nothing. Said moniker largely came via a 1974 Virginia Slims poll conducted by Roper on a respected list of public figures, where Cronkite scored highest with 60 percent of those polled stating they trusted him and 31 percent answering “somewhat”. Context: Then-Secretary of State Henry Kissinger finished second with 56 percent. Then-President Richard Nixon — still four months from resigning, came in with just 24 percent.

But from a media perspective, this 1981 Harris poll really told the story:

Question: “If you had to choose, who would you say is your favorite nightly network TV news anchorperson: John Chancellor, Walter Cronkite, Peter Jennings, Ted Koppel, Roger Mudd, Frank Reynolds, or Max Robinson? “ CBS’s Cronkite picked up 50 percent of the vote. NBC’s John Chancellor came in second with just 12 percent.

From my perspective when learning about the broadcast business, this nugget was one I live by to this day: Cronkite actually trained himself to speak at a slower rate… something more than a few folks on television now could still use a course in. In fact, he was so exact that he scaled down his pace to an average of 124 words per minute during his newscasts. Context: The average American averages 165 words per minute, with some even going as high as 210. It’s that type of deliberate pace which helps the audience both trust the speaker and absorb exactly what he was saying. Takeaway: Cronkite will always be seen as the standard when it comes to objective news anchors… the kind you teach aspiring journalists about for generations.

If Cronkite chose an ideological side at the time, Cuomo is correct in that he couldn’t have been that much more trusted than other anchors and public figures if that bias was apparent. But here’s where Carson is correct as well: While Cronkite did his job well and showed no signs of bias, there was one incident that very easily could have derailed his career for good well before it really reached its apex. The year was 1952. GOP convention. Chicago. And if you think any journalist — particularly an anchor — could survive doing what Cronkite pulled off here in the polarized, social media and cable news-driven era we live in today, you’re officially certifiable.

To review, Cronkite, working with CBS as part of its gavel-to-gavel coverage of the convention (the first time CBS, NBC and ABC went all-in on the event). had the Credentials Committee room secretly wired to allow him to learn more about a raging debate between Robert Taft (then-Senator of Ohio) and General Dwight Eisenhower for the Republican nomination. From Douglas Brinkley’s must-read 2012 biography, Cronkite:

“Just how hungry Cronkite was to excel in CBS’s coverage of the conventions became readily apparent when he orchestrated the secret tape recording of the Republicans’ credentials committee meeting. Long before the Nixon administration bugged the Democratic National Committee office at the Watergate in 1972, Cronkite, after much deliberation, had a CBS technician wire the committee room under the shady rationale that the covert act was good for democracy.

“He ran a wire,” Cronkite recalled, “up the outside of the hotel and into a broom closet several floors above. There one of our newspeople listened through earphones and rushed notes . . . to me downstairs. The sources of these reports baffled both the Republicans and my broadcast opposition.” Of course, and perhaps this is part of what Ben Carson was alluding to, Cronkite had no such inclination to bug any rooms at the Democratic convention that year.

2016 Hypothetical Context: In an effort to be privy to behind-the-scenes fighting over Donald Trump’s nomination in Cleveland and to listen to what establishment Republicans were planning privately over possibly running a third party candidate, Scott Pelley had a CBS technician bug a conference room he knew party leaders would be meeting in… all in an effort to get a leg up on the competition.

“The sources of these reports baffled both the Republicans and my broadcast opposition,” Pelley would later explain triumphantly.

Would Pelley — a solid anchor for the CBS Evening News and 60 Minutes Correspondent — survive that? Never in 1000 years. And if Cronkite tried to pull something like that off today, Twitter would break. Talking heads would literally explode on the air. And not only would Cronkite lose his job and likely never work at any traditional and/or major outlet again, his bosses in the news division would likely be walked out the door as well.

Also per the Washington Post, Cronkite would later share he wished he had been asked to be George McGovern’s running mate against Richard Nixon in 1972: ““I’d have accepted in a minute; anything to help end that dreadful war.” Ironically, McGovern reportedly didn’t ask because he feared the embarrassment of Cronkite turning him down.

Some other quotes from Cronkite to help back up Carson’s claim:

On then-presidential candidate John Kerry running from his liberal label in a 2004 open letter published in The Denver Post: “When the National Journal said your Senate record makes you one of the most liberal members of the Senate, you called that ‘a laughable characterization’ and ‘the most ridiculous thing I’ve ever seen in my life.’ Wow!…What are you ashamed of?”

On economic policy to then-CNN anchor Aaron Brown on CNN: “It seems to me that instead of cutting taxes, we ought to be increasing the taxes to pay off the deficit.”

At a DC banquet in 1994: “I know liberalism isn’t dead in this country. It simply has, temporarily we hope, lost its voice….We know that unilateral action in Grenada and Tripoli was wrong. We know that ‘Star Wars’ means uncontrollable escalation of the arms race. We know that the real threat to democracy is the half of the nation in poverty. We know that no one should tell a woman she has to bear an unwanted child….God Almighty, we’ve got to shout these truths in which we believe from the housetops.”

Add it all up, and Chris Cuomo is right: When on the air at CBS, Cronkite was about as straight a news anchor as you’ll find. He built unprecedented trust with the American people… so much so — and even try to remotely picture this happening today — he was strongly considered as a vice presidential pick while still on the job.

But Carson is right to in this sense: Behind the scenes, Walter Cronkite was a staunch liberal if any of the myriad of examples above are any indication. For the most part, he didn’t show that side on the air while anchoring at CBS, yes… but technically as a whole, Carson is correct as well.

We live in a world of definitive conclusions, of absolutes.

In this case, both anchor and interviewee were quite right, even when disagreeing with each other.