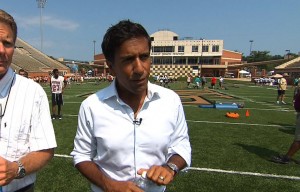 Most people know Dr. Sanjay Gupta from their television sets, as CNN’s Chief Medical correspondent. But he’s not just a talking head who traded in his lab coat for the comfy life of a TV analyst — a practicing neurosurgeon, Dr. Gupta is a member of the staff and faculty at the Emory University School of Medicine and regularly performs surgery at both Emory University and Grady Memorial Hospital. His familiarity with the brain and how it functions drove him to spend parts of the 2011 football season with the Junius H. Rose High School Rampants in Greenville, North Carolina. In 2008, Jaquan Waller, a junior, died from “second impact syndrome,” a fatal swelling of the brain that occurred when he took a blow to his head before a previous concussion injury had healed.

Dr. Gupta, a graduate of the University of Michigan, a traditional football powerhouse, says that he went to all the football games when he was in college — and still attends them — and that, in the late 80s and early 90s, “no one paid attention” to head injuries suffered by football players. “My guess is there were lots of concussions happening, but people didn’t call it that,” he explains to Mediaite. “I think the misconception at the time was that you had to be knocked out to have had a concussion. And people almost wore it as a badge of honor.” Medical advances, he says, have brought concussion research to levels that were previously impossible. “We know more about what those hits do to the brain than ever before. There’s real science now. In the past it was anecdotal and you thought, ‘Wow, that doesn’t look good.'”

The documentary, Big Hits, Broken Dreams, airs on CNN Sunday night at 8 p.m. (Eastern). In the meantime, though, we figured that since we had Dr. Gupta’s ear, we might as well ask him some burning medical questions of our own — some related to brains, some just out of morbid curiosity. He was kind enough to oblige:

1. Cell phone radiation: Where is that on the scale of danger?

The World Health Organization now calls cell phones a possible carcinogen. I use a cell phone, but I use an ear piece, and I don’t put it in my front pocket. Put it in the back pocket, jacket pocket, put it in a bag. If I’m sitting at a desk, I’ll put it on the desk in front of me. I don’t lose sleep from worrying about this, but these are simple things we can do to protect ourselves. Even in the cellphone pamphlets, they tell you to not hold a cellphone closer than an inch to your ear.

2. How about laptops? The whole thing with maybe decreasing sperm counts?

The concern is the non-ionizing radiation. The question is, how much exposure are you getting? And can you limit it as much as possible? I don’t worry a lot about these things, but I do think that the amount of radiation exposure we get these days is exponentially higher than we did 15, 20 years ago. So anything you can do to limit your exposure to radiation is a good idea. But I don’t think you need to give up any of these products. I try not to put the laptop directly on my lap, I try not to put the cellphone directly to my ear.

The hangover’s definitely caused by dehydration. If you try to drink a glass of water with every drink that you have, you’re going to have a much better shot of reducing the chance of having a hangover. Just keep in mind that alcohol is a diuretic, so it makes you lose even more fluids. So one glass of water for every drink you have, probably got a pretty good chance of beating a hangover.

4. Moving outside of the head for a moment — President Obama’s hair seems to be have more grey in it every day. Is that stress? Or is he just getting old?

Stress can certainly cause that. He is aging, though, too. We did a whole thing on the overall impact of the job on Presidents, and there’s no doubt that it’s a stressful job, but also keep in mind that despite that, Presidents often live longer than other men of their age. So the stress is not shortening their lifespans. We just pay a lot of attention to these guys, see them on TV every single day, so we notice things more so than people that are not President. He’s definitely going grey, though, just like every President of the TV era before him

5. When you’re out, do you find people asking you more for pictures and autographs, or bugging you for medical advice?

You know, it’s about half and half. It’s always funny when you’re running through an airport quickly to catch a flight or something and someone has some medical question, you know, like really specific, and what’s funny to me is they’ll just come up and start talking to me like I’m their doctor. Obviously, they know who I am, but I don’t know who they are. But I think it’s nice and flattering that they’re comfortable approaching and just talking to me. I guess they get a certain degree of comfort from the TV.

Watch a preview of Big Hits, Broken Dreams below, courtesy of CNN: