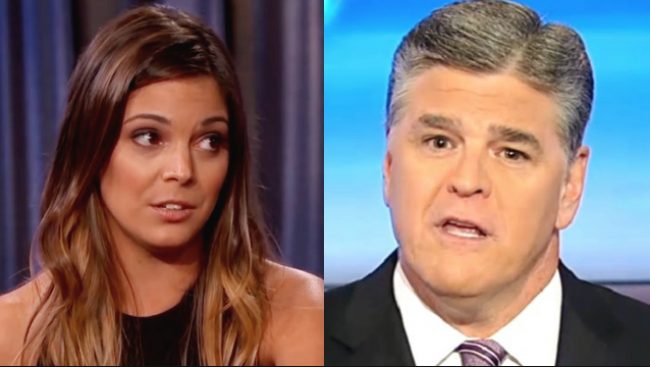 Fox New’s Sean Hannity is in another Twitter spat with a media personality, but interestingly enough, this time he faced off with a fellow host who works for 21st Century Fox.

On Saturday night, Hannity waged war with The New York Times after they put out an article that addressed how often he speaks with and gives advice to President Donald Trump. As Hannity was tweeting, the Fox pundit received quite the critical message from Katie Nolan, host of Garbage Time on Fox Sports 1.

@seanhannity @nytimes To say your convos are private, sure. But to suggest if something leaked that you were SURVEILLED? That's next-level self-importance

In the day that followed, Nolan has dedicated much of her Twitter activity to retweeting hate comments and responding to Hannity’s defenders. Nolan deleted some of her tweets along the way, one of which involved her saying that she and Hannity don’t work for the same company.

Hannity eventually turned his attention to Nolan, which resulted in this exchange:

Katie if you are going to try politics, you have to do research. Google Hannity Surveillance & Unmasking reports. Then attack me! Best Sean https://t.co/DkeQSLTiJY

That's so nice of you. And how long do you think this "career" in the sports world will last if you keep tweeting like this? Good luck Sean https://t.co/DjG2flq2A1

@seanhannity I apologize for cursing, dad. I just think you knowingly deceive people for your own benefit and that makes me angry. Good luck Katie

Katie, Dad? Really. Ouch!! No need at all to apologize, I have ZERO problem with you being real. Best of luck always. Sean https://t.co/R1fOEwHGYC

Hannity did offer some other tweets on the matter, where he more or less defended Nolan’s right to criticize him:

I would NEVER want somebody fired for expressing their heartfelt views. Unlike the left, I don't support boycotts etc. to silence opponents! https://t.co/rDKtvRExLa

Hannity has previously shown that he’s not afraid to publicly feud with his fellow Fox hosts. Last year, Hannity attracted major intrigue when he accused former Fox host Megyn Kelly of being a Hillary Clinton supporter after she said that Donald Trump avoids tough interviews.