After Media Leaves, Alt-Right Leader Rails Against Jews as Men Give Nazi Salute 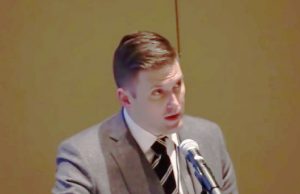 Over the weekend, leading voices of the alt-right movement gathered a few short blocks from the White House for a conference full of speeches and panels to discuss their vision of the future. The event took on new meaning with Donald Trump’s surprising victory over Hillary Clinton in the presidential election.

According to the New York Times, the early parts of the conference had a much more subdued tone when it came to racism and rhetoric towards minorities and immigrants, but after reporters called it a day and left, the discourse became harsher and more overtly angry.

With Richard Spencer as the final speaker — Spencer is perhaps the ideological godfather of the movement — he ended the evening by espousing white supremacist ideals to the joy of many in the audience.

But now his tone changed as he began to tell the audience of more than 200 people, mostly young men, what they had been waiting to hear. He railed against Jews and, with a smile, quoted Nazi propaganda in the original German. America, he said, belonged to white people, whom he called the “children of the sun,” a race of conquerors and creators who had been marginalized but now, in the era of President-elect Donald J. Trump, were “awakening to their own identity.”

As he finished, several audience members had their arms outstretched in a Nazi salute. When Mr. Spencer, or perhaps another person standing near him at the front of the room — it was not clear who — shouted, “Heil the people! Heil victory,” the room shouted it back.

Spencer — who was recently suspended from Twitter, along with his think tank — also hammered away at the mainstream media, invoking the crowd to refer to them as “Lugenpresse,” a word used during Nazi Germany to describe the media as the “lying press.” (This had been heard numerous times at Trump rallies.)

He seemed to reference the infamous Nazi propaganda film Triumph of the Will while talking about Trump’s victory.

Mr. Trump’s election, Mr. Spencer said, was “the victory of will,” a phrase that echoed the title of the most famous Nazi-era propaganda film. But Mr. Spencer then mentioned, with a smile, Theodor Herzl, the Zionist leader who advocated a Jewish homeland in Israel, quoting his famous pronouncement, “If we will it, it is no dream.”

As noted by the NYT, Spencer and other speakers at the conference wouldn’t necessarily call Trump or his chief strategist, Breitbart’s Steve Bannon, members of the alt-right. While stating that Trump shouldn’t be considered alt-right, Spencer did note that there is a “psychic connection” to the movement.

Also reporting on the summit, The Daily Beast noted that D-list celebrity Tila Tequila and other attendees of the conference tossed out ‘Seig Heil’ salutes at a dinner the night before. While the conference was going on, some tussled with protesters outside.

Watch video of Spencer’s speech above.