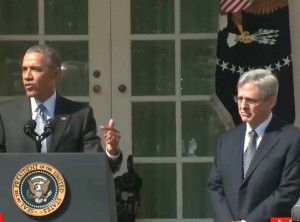 Everyone seems to think they already know what’s going to happen to President Obama‘s just-announced Supreme Court nominee, DC Circuit Court Chief Judge Merrick Garland. Republicans have already signaled that they intend to make good on their promise not to even consider the nomination, and liberals are all fairly convinced that Obama only nominated a centrist like Garland in order to make Republicans look stupid. Republicans like Senate Judiciary Committee member Orrin Hatch (R-UT), who said this three days ago:

“The President told me several times he’s going to name a moderate [to fill the court vacancy], but I don’t believe him,” Hatch told us.

“[Obama] could easily name Merrick Garland, who is a fine man,” he told us, referring to the more centrist chief judge of the U.S. Court of Appeals of the District of Columbia who was considered and passed over for the two previous high court vacancies.

But, Hatch quickly added, “He probably won’t do that because this appointment is about the election. So I’m pretty sure he’ll name someone the [liberal Democratic base] wants.”

The thing is, Obama probably nominated Judge Garland in good faith, even knowing that if Garland were actually confirmed, liberal heads everywhere (mine included) would explode, but I will grant that it is possible that the President is just counting on Republicans to be this stupid.

What they have a chance to do now is to get Obama to waste a SCOTUS pick on a white dude whom they actually like, but on the morning after Donald Trump came this close to completely sewing up the Republican presidential nomination, they’re flipping a coin that Hillary Clinton might pick the next justice instead. With a Senate election map that already favored Democrats, they’re willing to risk leaving a lifetime appointment in the hands of a down-ticket disaster like Trump.

There are, however, six simple words that could get Judge Garland confirmed more quickly than a reservation at Guy Fieri’s Chipotle!, and they need only be spoken once by Hillary Clinton.

Even the most optimistic Republican has to shudder at the prospect of legalized infanticide, comprehensive gun confiscation, Sharia Law, and healthcare for all that an Obama court would obviously entail, and conclude it’s too big a risk to take. If Hillary wins and the Democrats take back the Senate, they won’t hesitate to end the judicial filibuster and slide Obama right onto the bench next to Elena Kagan.