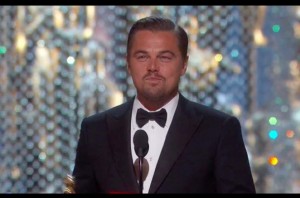 The Academy of Motion Picture Arts & Sciences honored DiCaprio’s work in The Revenant this year, a gritty tale about survival on the American frontier set in the 19th century. The film was directed by Alejandro G. Iñárritu, and was nominated for a total of twelve Oscars tonight.

Despite a stunning career in film achievement, the 41-year-old actor has never won an Oscar statue, having earned four acting nominations in the past (along with one for producing). In 1993, a young DiCaprio was nominated for Best Supporting Actor for his work in What’s Eating Gilbert Grape, and followed that up in 2005 with a Best Actor nom for the Martin Scorsese-helmed The Aviator. DiCaprio was also nominated for Blood Diamond in 2007 and in 2014 for The Wolf of Wall Street.

Aside from thanking the entire cast and crew that made The Revenant possible, DiCaprio used his moment in the spotlight to toss in a bit of politics, addressing global warming directly. “Our production needed to move to the southern tip of this planet just to be able to find snow,” the Oscar winner said. “Climate change is real. It is happening right now. It is the most urgent threat facing our entire species, and we need to work collectively together,” he continued, to applause from the audience at the Dolby Theatre in Hollywood.