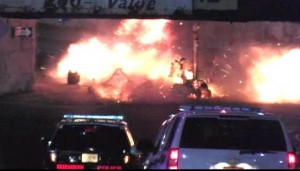 While you were watching Veep win Most Outstanding Comedy Series at the Emmys or Sam Bradford lead the Minnesota Vikings to a win over the Packers on Sunday Night Football, there were two different though possibly linked events in the tristate area regarding the blast in Manhattan Saturday night that injured 29.

Just one night after a dumpster bomb detonated near 23rd St and 6th Ave in the Manhattan neighborhood of Chelsea — with another undetonated pressure cooker found and removed only four blocks away — two separate incidents unfolded demanding the attention of the FBI and local law enforcement. As of Monday morning 7:50 A.M. EST, here’s the latest we know about each.

BROOKLYN, NEW YORK: Sometime around 9:30 p.m. EST Sunday night, a SUV carrying five people traveled east over the Verrazano Bridge from Staten Island into Brooklyn. The vehicle was identified as one of “interest” by the FBI, who pulled over the truck and its five occupants. The FBI immediately sought backup from the New York Police Department, and all five people in the vehicle were detained after a weapons stash was found inside.

The vehicle was stopped heading east on the Belt Parkway, the main road that hugs the southern border of the outerborough headed towards JFK Airport and parts of Long Island. Although all five people inside the SUV were detained, none have been charged at this time.

New York State Senator Marty Golden took to Instagram to identify that the FBI took these people “with a possible connection to the bombing” in Chelsea the night before. A source confirmed the the New York Daily News that the suspects were taken to Federal Plaza in downtown Manhattan. Nothing more is currently known about the five individuals.

ELIZABETH, NEW JERSEY: At about the same time that the SUV was being pulled over on the Belt Parkway, two homeless men in the town of Elizabeth, New Jersey found a package in a garbage next to the Elizabeth train station, one of the busiest thoroughfares for rails between New York City and Trenton, Philadelphia, and Washington DC. At the intersection of North Broad Street and Julian Place, the men took the package out of the wastebasket, “because they thought it was of some value to them,” according to Elizabeth Mayor Chris Bollwage.

After spotting “wires and a pipe,” the men dropped the package underneath the train trestle and alerted Elizabeth police. The Union County bomb squad was brought in, and a bomb robot soon identified that it was in fact a live explosive inside a backpack.

The FBI and New Jersey state police were called in and approaching 1 a.m. local time, the robot detonated one of the five explosives while attempting to cut wires:

Northeast Corridor rail service was suspended out of New York City’s Penn Station as a result of the investigation, and already this morning New Jersey Transit has cancelled a handful of trains operating on that line. Others are operating under heavy delays.

Early this morning at an apartment in Elizabeth, NJ nearby the train station, the FBI underwent a raid in direct connection with the package found and investigated late Sunday night. NBC News’s Tom Winter reported this morning via Twitter, “Law enforcement officials say that they are concerned that there MAY be an active terror cell in the NY/NJ area.”

Although Elizabeth is not directly a commuter zone for people in and out of New York City, it is actually located near one of the main thoroughfares that goes directly through Staten Island: Interstate 278. Although no link has been proven between the two events Sunday night, they are not geographically separated by much. Route 278 essentially connects the town of Elizabeth and the Belt Parkway in Brooklyn by a span of only about 15 miles where the SUV was pulled over.

Information regarding both of these stories continues to develop, and we will update each accordingly.

UPDATE – 2:20 p.m. ET: Since the writing of this post, prime suspect Ahmad Khan Rahami was cornered in New Jersey during a police shootout, and was taken into custody. Law enforcement officials have raided his family’s fried chicken restaurant as investigations about his motivations continue.

Both Donald Trump and Hillary Clinton have offered commentary about the ongoing story, and the NYPD recently held a press conference with New York Mayor Bill de Blasio and other high level officials about the ongoing case.