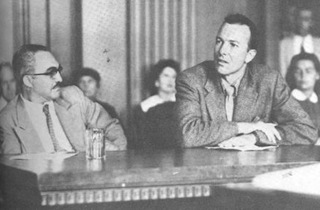 Pete Seeger, the legendary folk singer (though he didn’t care for the term), died last night at the age of 94. A longtime political activist, Seeger is the only member of the Rock and Roll Hall of Fame to have been cited for contempt by Congress for his refusal to cooperate with the House Un-American Activities Committee.

The transcript of said questioning is like a Joseph Heller novel come to life. Seeger was called on August 18, 1955 and quizzed about the where and when of his performances and allegiances. Seeger skillfully tap-danced around the questions, often with humor, sometimes with protest, and refused to use the Fifth Amendment as a literal get-out-of-jail-free card. He was eventually sentenced to a year in prison for contempt, a verdict he successfully appealed.

Read highlights below, or the whole thing here.

MR. TAVENNER: What is your profession or occupation?

MR. SEEGER: Well, I have worked at many things, and my main profession is a student of American folklore, and I make my living as a banjo picker—sort of damning, in some people’s opinion.

MR. TAVENNER: Mr. Seeger, prior to your entry in the service in 1942, were you engaged in the practice of your profession in the area of New York?

MR. SEEGER: It is hard to call it a profession. I kind of drifted into it and I never intended to be a musician, and I am glad I am one now, and it is a very honorable profession, but when I started out actually I wanted to be a newspaperman, and when I left school —

CHAIRMAN WALTER: Will you answer the question, please?

MR. SEEGER: I have to explain that it really wasn’t my profession, I picked up a little change in it.

MR. TAVENNER: The Committee has information obtained in part from the Daily Worker indicating that, over a period of time, especially since December of 1945, you took part in numerous entertainment features. I have before me a photostatic copy of the June 20, 1947, issue of the Daily Worker. In a column entitled “What’s On” appears this advertisement: “Tonight-Bronx, hear Peter Seeger and his guitar, at Allerton Section housewarming.” May I ask you whether or not the Allerton Section was a section of the Communist Party?

MR. SEEGER: Sir, I refuse to answer that question whether it was a quote from the New York Times or the Vegetarian Journal.

MR. TAVENNER: I don’t believe there is any more authoritative document in regard to the Communist Party than its official organ, the Daily Worker.

MR. SCHERER: He hasn’t answered the question, and he merely said he wouldn’t answer whether the article appeared in the New York Times or some other magazine. I ask you to direct the witness to answer the question.

CHAIRMAN WALTER: I direct you to answer.

CHAIRMAN WALTER: You have only been asked one question, so far.

MR. SEEGER: I am not going to answer any questions as to my association, my philosophical or religious beliefs or my political beliefs, or how I voted in any election, or any of these private affairs. I think these are very improper questions for any American to be asked, especially under such compulsion as this. I would be very glad to tell you my life if you want to hear of it.

MR. SEEGER: I feel that in my whole life I have never done anything of any conspiratorial nature and I resent very much and very deeply the implication of being called before this Committee that in some way because my opinions may be different from yours, or yours, Mr. Willis, or yours, Mr. Scherer, that I am any less of an American than anybody else. I love my country very deeply, sir.

CHAIRMAN WALTER: Why don’t you make a little contribution toward preserving its institutions?

MR. SEEGER: I feel that my whole life is a contribution. That is why I would like to tell you about it.

CHAIRMAN WALTER: I don’t want to hear about it.

MR. TAVENNER: Did you sing this song, to which we have referred, “Now Is the Time,” at Wingdale Lodge on the weekend of July Fourth?

MR. SEEGER: I don’t know any song by that name, and I know a song with a similar name. It is called “Wasn’t That a Time.” Is that the song?

CHAIRMAN WALTER: Did you sing that song?

MR. SEEGER: I can sing it. I don’t know how well I can do it without my banjo.

MR. TAVENNER: I hand you a photograph which was taken of the May Day parade in New York City in 1952, which shows the front rank of a group of individuals, and one is in a uniform with military cap and insignia, and carrying a placard entitled CENSORED. Will you examine it please and state whether or not that is a photograph of you?

(A document was handed to the witness.)

MR. SEEGER: It is like Jesus Christ when asked by Pontius Pilate, “Are you king of the Jews?”

MR. TAVENNER: Did you take part in the American Peace Crusade program in Chicago in April of 1954?

MR. SEEGER: My answer is the same as before. Of course, I would be curious to know what you think of a song like this very great Negro spiritual, “I’m Gonna Lay Down My Sword and Shield, Down by the Riverside.”

MR. TAVENNER: That is not at all responsive to my question.