Herman Cain: ‘How Do You Say Delicious In Cuban?’ 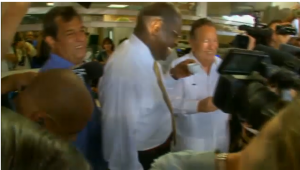 Today, Herman Cain (Perhaps you’ve heard of him?) paid a visit to Versailles, a relatively important landmark in Miami, particularly for EL EXILIO™, the exiled Cuban community to whom politicians often cater and/or pander during election season. It serves awesome vaca frita (as long as you make sure to specify that you want it served extra crispy), flaky and sweet pastelitos de guayaba, plump and delicious croquetas, and many, many tiny, fragrant, powerful cups of cortadito.

Cain tried a shot of Cuban coffee while visiting the restaurant, commenting that it was very good, much to the delight of those around him. Then, he tried a ham croqueta. And it, too, was good. It was, in fact, delicious. And yet, that just didn’t seem like the right word. “How do you say ‘delicious’ in Cuban?” Cain asked the crowd around him.

Now. It’s not exactly a secret that I’m less than happy with Cain’s habit of dismissing his less appropriate comments or gaffes as being “jokes,” but I think that, maybe, the man may have just been joking here. Perhaps I’m blinded by homesickness and jealousy because I’m here in the New York rain instead of in humid Miami, eating my weight in croquetas and pastelitos, but I’m willing to give the man the benefit of the doubt and chalk this up as a cute, jokey comment rather than the results of Cain not knowing that people in Cuban speak Spanish, albeit a Spanish many non-Cubans can’t seem to understand unless we speak slowly.

Have a look at what happened for yourselves: