Herman Cain: Mitt Romney Won’t Win Because He Doesn’t Do A Good Job Of ‘Communicating His Religion’ 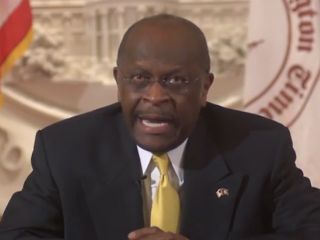 Say what you will about GOP presidential hopeful Herman Cain, but he’s never been one to mince his words. He proved as during an interview recently published by The Washington Times, wherein which he listed several reasons why he believes Mitt Romney will not be able to win the Republican nomination. One, big reason? Romney is Mormon and, says Cain, that doesn’t play well in the South:

He would be a good choice, but I don’t believe he can win for the following reasons. One, he ran before. He has an ankle bracelet on called “RomneyCare.” Secondly, I know the South and you have to win the South. Mitt Romney didn’t win the South when he ran; John McCain won the South, Mike Huckabee won the South. And I think that the reason that he will have a difficult time winning the South is because when he ran the first time he did not do a good job of communicating his religion.

Unfortunately, it doesn’t bother me. But I do know that it’s an issue with a lot of the Southerners. You don’t win South Carolina and Florida and Georgia, you can’t win the nomination. And then you can’t win the presidency.

I like Mitt. I supported Mitt Romney in the last presidential election. But he didn’t get the nomination. John McCain got the nomination. And so I don’t think that he is going to be any stronger this time around against Barack Obama, even though Barack Obama has a terrible record. Terrible.

Of course, Cain is not alone in his assessment. The crew over at Fox & Friends also feel that Romney’s faith may be a hindrance, amusingly (or depressingly, if you’re so inclined) agreeing with a guest’s comment that Romney is “not a Christian.”

Take a look at Cain’s speech: