Hackers Take On Rupert Murdoch-Owned The Sun, Post Fake Article About His Death 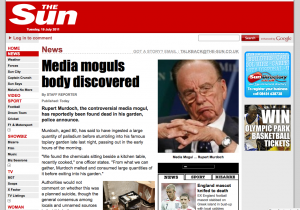 The hacking collective LulzSec (or Lulz Security) has hacked a News International-owned website and have published a fake Sun article about Rupert Murdoch’s death of a drug overdose.

Well, on the upside, Fox & Friends will now be able to tell the difference between phone hacking and being hacked.

LulzSec is the group behind a number of recent high profile hacks including a couple on Murdoch-owned properties. They have also had a history with the Sun which they called “the shittiest UK publication in existence.”

Interestingly, at this time, the hackers have not posted the story on The Sun’s official website, instead hacking the News International-owned http://www.new-times.co.uk/sun/ address and creating a redirect so that, when someone tries to go to the official site, it sends them to the story.

The story is currently hard to load presumably due to traffic, but here is the text of the article:

Media moguls body discovered
By STAFF REPORTER
Published: Today
Rupert Murdoch, the controversial media mogul, has reportedly been found dead in his garden, police announce.
Murdoch, aged 80, has said to have ingested a large quantity of palladium before stumbling into his famous topiary garden late last night, passing out in the early hours of the morning.

“We found the chemicals sitting beside a kitchen table, recently cooked,” one officer states. “From what we can gather, Murdoch melted and consumed large quantities of it before exiting into his garden.”

Chemicals found in house
Authorities would not comment on whether this was a planned suicide, though the general consensus among locals and unnamed sources is that this is the case.

One detective elaborates. “Officers on the scene report a broken glass, a box of vintage wine, and what seems to be a family album strewn across the floor, containing images from days gone by; some containing handpainted portraits of Murdoch in his early days, donning a top hat and monocle.”

Another officer reveals that Murdoch was found slumped over a particularly large garden hedge fashioned into a galloping horse. “His favourite”, a butler, Davidson, reports.

Butler Davidson has since been taken into custody for additional questioning. 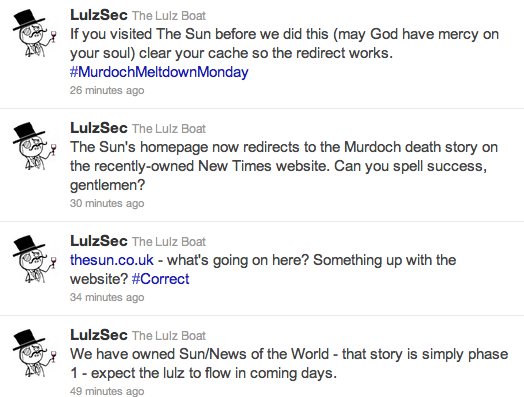