Hillary Clinton: What Snowden Did ‘Gave All Kinds of Information’ to Terrorists
video

Hillary Clinton: What Snowden Did ‘Gave All Kinds of Information’ to Terrorists 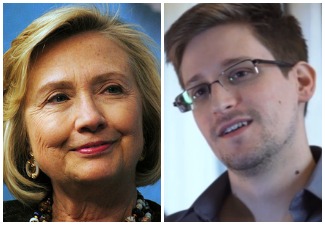 During a Q&A at the University of Connecticut this week, Hillary Clinton took questions on a number of issues, including the media, but the former Secretary of State also fielded a question about Edward Snowden, questioning the NSA whistleblower’s stays in both China and Russia, and saying that what Snowden did ended up helping terrorist groups.

Clinton talked about getting the “liberty-security balance right” after 9/11 and the need in Washington to “make sure that we’re not infringing on Americans’ privacy.” However, she’s less than convinced that Snowden may have had the best of motives at heart. She said Snowden could have gotten whistleblower protections, remarking that it’s “sort of odd” he would to to both China and Russia, “two countries with which we have very difficult cyber-relationships.”

Clinton revealed how seriously the State Department took security when it came to foreign visits to Russia and China before sharing her thoughts on what kind of damage Snowden did to the country.

“I think turning over a lot of that material—intentionally or unintentionally, because of the way it can be drained––gave all kinds of information, not only to big countries, but to networks and terrorist groups and the like. So I have a hard time thinking that somebody who is a champion of privacy and liberty has taken refuge in Russia.”

Clinton also took a moment to mock the strange moment when Snowden asked Vladimir Putin about Russian surveillance during a live chat.

Watch the video below (apologies for the poor quality):