Hollywood Chamber of Commerce: Trump’s Hollywood Star Will Be Repaired 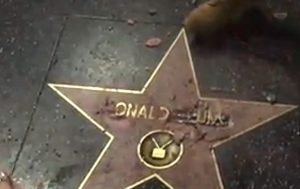 The Hollywood Chamber of Commerce has announced that they will replace Donald Trump‘s Walk of Fame star after the heavy damage that was done to it early this morning.

The LAPD has launched a felony investigation into Wednesday’s incident, where a vandal masqueraded as a construction worker in order to destroy the star dedicated to the reality star-turned-GOP nominee. Leron Gubler, president and CEO of the Hollywood Chamber of Commerce, said that Trump’s star will be replaced, and that they are working to make sure the perpetrator is prosecuted “to the full extent of the law.”

JUST IN: Trump’s Walk of Fame star will be replaced, but it will take several days for a brand new one to be made: https://t.co/6b3d1yyuru pic.twitter.com/KOp5Dcvs50

“The star will be repaired immediately, but requires several days of seasoning before it is polished,” Gubler said in a public statement. “When people are unhappy with one of our honorees, we would hope that they would project their anger in more positive ways. People can make a difference by voting and not destroying public property.”

The self-identified vandal has told the media that he originally wanted to steal and then sell the star in order to help pay the legal fees for the women who have recently accused Trump of inappropriate sexual behavior. Trump’s star has been defiled multiple times over the past few months by those who disagree with his controversial politics.