‘How the F*ck Do You Think They Feel?’: Ex-Detroit Piston Rasheed Wallace Says Flint is Still in Crisis

‘How the F*ck Do You Think They Feel?’: Ex-Detroit Piston Rasheed Wallace Says Flint is Still in Crisis 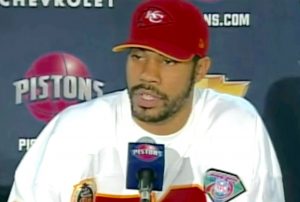 “Some of the folks in Flint can’t take showers because their water is still poisoned with lead.”

That report comes from former Detroit Pistons star Rasheed Wallace. In an essay published at The Players Tribune which ran under his byline, the retired NBA player said he has visited Flint for the past year, and he painted a very grim portrait.

“A grown-ass man has to take a bird bath,” the piece read. “That shit ain’t right. It’s still going on today.

He added: “How the fuck do you think they feel?”

Wallace went on to accuse the government of turning their backs on the ongoing crisis:

Every time I go, I’m amazed by the people, but I’m sickened by the lack of help.

Don’t believe the hype that you hear about the water being fixed. That water’s not fixed. This shit ain’t over. Just because it isn’t being talked about doesn’t mean it’s over. Light still needs to be shone on this.

Just think of any other catastrophe that’s occurred in the U.S. There’s always been a government agency that’s come help.

What if this had happened in New York? You mean to tell me that the people of Flint — just because it wasn’t a natural disaster — can’t get no help? That’s ludicrous! The government just approved funding at the beginning of October, nearly two years after we learned that the water was fucked up. What took so long?

Read the full piece here, via The Players Tribune.