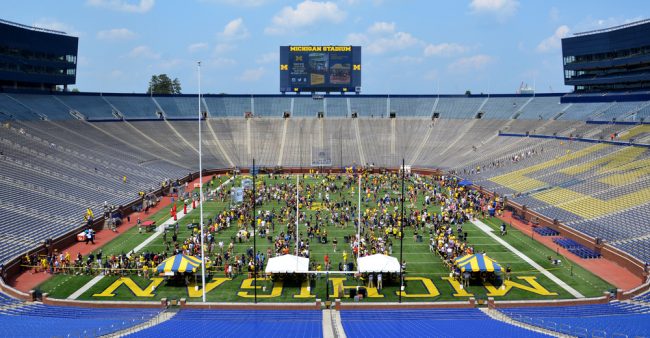 What more needs to be said?

One of college football’s premiere rivalries will be renewed on Saturday afternoon in Ann Arbor, as the unranked Wolverines play host to the No. 8 Buckeyes.

Ohio State — quite improbably, still has a legitimate shot at making the college football playoff, even after suffering a 31 point loss against Iowa three weeks ago. The Buckeyes have played themselves back into the mix with blowout victories over Michigan State and Illinois. Another over their hated rival, followed up with a win against Wisconsin in the Big 10 title game next week could very well — with the right sequence of results in the ACC and SEC — but them in the field.

Michigan, at 8-3, harbors no such hopes. So it’s all about the big game on Saturday for the Wolverines — which will be played in front of their home faithful. Rumors abound, as they surely will every off season, about coach Jim Harbaugh heading back to the NFL. If he’s going to leave, a win over Ohio State would be a nice way to go out — particularly after last year’s heartbreaker in Columbus.

Kickoff is at 12:00 p.m. ET. The game will air on FOX. Gus Johnson and Joel Klatt, the network’s lead college football announce crew, have the call. The action can be streamed free with a cable subscription on pc, cell phone, or tablet via Fox Sports Go — which can be downloaded via Apple’s App store, and the Google Play store.