How Trump’s Victory Was a Lot like the O.J. Simpson Verdict
Opinion

How Trump’s Victory Was a Lot like the O.J. Simpson Verdict 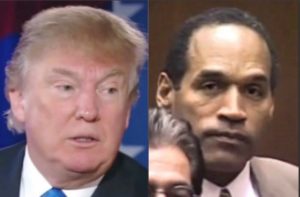 Several times this year, while I was incorrectly predicting that Donald Trump would not win the presidential election (you know, that event which was so “rigged” against him that he won it despite apparently getting significantly fewer votes than his more qualified opponent?), I compared elements of the presidential campaign to the O.J. Simpson case. Obviously, I should have followed that analogy to its ultimate conclusion because I might have caught on sooner to how it would all really end.

For me, an unqualified liberal celebrity/conman being elected president with mostly conservative votes is a lot like a celebrity/football player who has lived a mostly “white” life getting away with double murder thanks to the votes of mostly black jurors (tellingly, Trump and Simpson were once pretty good friends). Judging from the incredibly divided emotional reaction to the Trump “verdict,” I am probably not alone in feeling a strong sense of sickening déjà vu (which is particularly bizarre for me, since I loathe Hillary Clinton).

But I also believe the comparisons between these two seminal cultural moments go much deeper than just that surface assessment. Here are the top ten ways in which Trump’s win really is like O.J.’s acquittal:

1) Money/Celebrity: Both Trump and Simpson were huge celebrities with enormous wealth. Inherently, this gave them both a benefit of the doubt among the “normal” people and an ability to fight back against media criticism, which a “normal” person would never have. Without these two things, like Superman on kryptonite, Simpson is easily convicted and Trump never gets past 2% in the GOP primary contest.

2) Too much evidence: Both Trump and Simpson inadvertently “benefited” greatly from the fact that there was such overwhelming evidence against them that it set in motion a series of events which actually worked in their favor. Among other things, there was so much to focus on that no one truly devastating fact really ever fully burrowed all the way home to the “jury” and, in a weird/conspiratorial way, a lot of jurors discounted all of it, thinking that there was too much for it all to be credible (or, like with the bloody glove not “fitting,” or the Gloria Allred accusers not seeming credible, discounting all the good evidence because of one suspect one).

3) Prosecution overconfidence: The crushing evidence against each of them led to overconfidence and carelessness in their prosecutors. After the Bronco chase it was so obvious that Simpson was guilty that a plea bargain was assumed and everyone’s guard was let down. In Trump’s case, his GOP opponents never thought that it was possible he could actually pull a Houdini act out of his own sordid past, so there was no real benefit in bothering to destroy him while he was vulnerable. The news media felt the same way and simply couldn’t resist the temptation of pretending that he wasn’t really “guilty” because it made for such an incredibly exciting and ratings-friendly story.

4) Defense unrestricted by truth: When you know you are guilty and have no principles to restrict the boundaries of your behavior, you have absolutely nothing to lose by lying your ass off and playing the dirtiest pool imaginable. That’s what Simpson’s defense team did and Trump’s defenders did exactly the same. When you are completely unrestrained by truth, logic, your past, or reality, it is FAR easier to sell a compelling story. Insane conspiracy theories about massive police cover ups and elections being “rigged” by thousands of people of both political parties are a lot more effective at keeping the attention of stupid people than the truth could ever be. In short, both Simpson and Trump were playing under vastly more beneficial rules of engagement than their opponents.

5) Prosecution incompetence/timidity: The prosecution in the Simpson case went about trying to convict Simpson in all the wrong ways (too much “domestic violence” and boring DNA). Similarly the Clinton campaign and the news media did much the same with Trump. The way to get Trump and Simpson both would have been to attack their phony personal narratives and strip them of what people see as their strength and personal likability. The Clinton team stupidly went for the “politically correct” attacks on Trump, which only appealed to liberals and made it wrongly appear that the only reason not to vote for Trump was that he says really mean things more than he should, and likes beautiful women too much. No one ever really went after Trump’s jugular (figuratively, not the way O.J. went after Nicole’s), seemingly because they wrongly presumed his many other flesh wounds would eventually bring him down.

6) Sexism: When Hillary gave her now infamous “how am I not ahead by 50 points?!” speech, my first reaction was that she had to be feeling the same intense frustration that Simpson prosecutor Marcia Clark clearly did as she saw an open and shut case begin to slip away. The similarities between Clinton and Clark are actually quite striking. One of them is that there is little doubt that they both suffered from at least some subliminal sexism, some of it by fellow women. The jury of mostly black females hated Clark. Hillary lost women without college degrees, seemingly a Democratic stronghold, by huge margins. Both ended up having certain victory snatched from their grasp without much real logic or reason.

7) Racism: Both Simpson and Trump played the “race” card in the worst way possible. Simpson got acquitted by laughably claiming he was a victim of a conspiracy to frame him because he is black, thus stirring up black anger on the jury. Trump duped poor white people into thinking he was one of them and played to their fears, thus taking advantage of the racism which many them use to rationalize their lot in life. Both tactics were as disgustingly cynical as they were brutally effective.

8) Bad judge/Good luck: Judge Lance Ito in the Simpson case was horrendous. He bent over backwards for the defense, I believe because he thought Simpson’s conviction was imminent and he wanted to show the world how incredibly fair our system of justice is. I don’t know what FBI Director James Comey’s motivations were in his actions during this election, but there is no doubt that he gave the “defense” (Trump) everything they needed to turn a campaign which was about Trump’s fitness for office into a referendum on Clinton’s apparently noncriminal emails. I don’t think the verdicts are exactly the same without the actions of Ito and Comey. Similarly, both Simpson and Trump benefited from amazing luck. Simpson had the findings of the irrelevant Mark Furhman tapes save him, while Trump clearly benefited from the equally extraneous and fortuitously timed Anthony Weiner sexting scandal.

9) News Media agenda: In the Simpson case the news media all knew that O.J. was guilty as hell, but they pretended that the prosecution and defense cases were somehow “equal,” under the guise of fair reporting. The reality was that they knew that if it was made clear that Simpson was guilty and all drama/mystery was sapped from the case, their ratings cash cow would go away prematurely. This is almost exactly the way the news media treated Trump. Only this time they will be rewarded with at least four full years of “full-employment” ratings.

10) Emotional jury: In the Simpson case, the jurors spent less than three hours deliberating a case they has spent most of a year hearing the evidence of. Two of them somehow voted guilty before almost immediately and inexplicably reversing course. It was not a verdict based on facts or logic. It was motivated by raw emotion and a desire to finally get home. In Trump’s case, the jury was actually literally split 50/50, but the jurors in the state which mattered most were also swayed by the emotion-based siren song that somehow America can be suddenly made “great” again by magic, sung to them by a confirmed conmen. Many of those jurors hated the very same fantasy-based message when it was delivered by a black man running for president, but now embrace it with great passion as this cycle’s empty vessel is one with which they have been fooled into relating.

Personally, the grave injustice of the O.J. Simpson verdict was a moment which fundamentally changed my life, almost entirely for the worse. I lost an enormous amount of faith in our systems and in humanity itself. It was a wound which has never fully healed (even after I played a small but significant role in why Simpson is currently in prison, at least until President Trump pardons him). I expect that Trump’s election may play a very similar role in my life, only this time with no reservoir of trust in anything in public life with which to draw hope. The public discourse is now so badly broken that it no longer makes any sense at all, and therefore no longer seems worth participating in.

For now, let’s just all hope that President Trump does a better job of staying out of trouble after his “acquittal” than O.J. Simpson did. I wish I believed that he will.