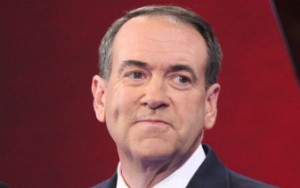 While Rep. Todd Akin‘s recent controversy left him largely abandoned by his party and high-profile conservatives (e.g., Sean Hannity), he still has a friend in Mike Huckabee. In an email sent to his supporters Thursday afternoon, Huckabee criticized the GOP’s “carefully orchestrated and systematic attack on a fellow Republican.”

Calling Akin a “friend,” Huckabee said he will join Akin in his “fight for our Party’s pro-life policies, traditional marriage and our efforts to rein in the massive expansion of government under President Obama.”

The Party’s leaders have for reasons that aren’t rational, left [Akin] behind on the political battlefield, wounded and bleeding, a casualty of his self-inflicted, but not intentional wound. In a Party that supposedly stands for life, it was tragic to see the carefully orchestrated and systematic attack on a fellow Republican. Not for a moral failure or corruption or a criminal act, but for a misstatement which he contritely and utterly repudiated. I was shocked by GOP leaders and elected officials who rushed so quickly to end the political life of a candidate over a mistaken comment in an interview. This was a serious mistake, but it was blown out of proportion not by the left, but by Akin’s own Republican Party. Is this what the party really thinks of principled pro-life advocates? Do we forgive and forget the verbal gaffes of Republicans who are “conveniently pro-life” for political advantage, but crucify one who truly believes that every life is sacred?

Who ordered this “Code Red” on Akin? There were talking point memos sent from the National Republican Senatorial Committee suggesting language to urge Akin to drop out. Political consultants were ordered to stay away from Akin or lose future business with GOP committees. Operatives were recruited to set up a network of pastors to call Akin to urge him to get out. Money has changed hands to push him off the plank. It is disgraceful. From the spotlights of political offices and media perches, it may appear that the demand for Akin’s head is universal in the party. I assure you it is not. There is a vast, but mostly quiet army of people who have an innate sense of fairness and don’t like to see a fellow political pilgrim bullied. If Todd Akin loses the Senate seat, I will not blame Todd Akin. He made his mistake, but was man enough to admit it and apologize. I’m waiting for the apology from whoever the genius was on the high pedestals of our party who thought it wise to not only shoot our wounded, but run over him with tanks and trucks and then feed his body to the liberal wolves. It wasn’t just Todd Akin that was treated with contempt by the thinly veiled attack on Todd Akin. It was all the people who have faithfully knocked doors, made calls, and made sacrificial contributions to elect Republicans because we thought we were welcome in the party. Todd Akin owned his mistake. Who will step up and admit the effort being made to discredit Akin and apologize for the sleazy way it’s been handled?

I’ve always believed and still do, that if you don’t honor your friendships, you don’t honor yourself. And I consider Todd a friend. So I will join Todd as often as I can, in his fight for our Party’s pro-life policies, traditional marriage and our efforts to rein in the massive expansion of government under President Obama. Todd is being systematically scourged for one thing he said. Is that more important than what Claire McCaskill has DONE over her 6 years in the Senate? If you’d like to join the fight, and help defeat a Democrat Senator standing in the way of a conservative majority, I encourage you to join me. The party has decided it won’t help. In fact, it has decided that it will try to cut off the supply lines to Akin to pressure him to exit and let the party bosses overturn the voters of Missouri and pick their own candidate. If this can happen to Todd Akin, who is next?

I’ve heard the talk of new deadlines and the nonsense about the Republican Party running a 3rd party candidate, but I am no longer listening to that noise. The idea that our Party would continue to play games behind the scenes and feed the Democrats make-believe narrative of the GOP’s fictional war on women is equally ridiculous. Now is the time to focus on electing a conservative Senate Majority. And if the NRSC and RNC and the money-rich PACS won’t help Todd Akin get us to the majority, then we’ll do it without them. And his seat will not have been sold to the highest bidder, but obtained by the highest principles.

The “nonsense” about a third-party candidate, as Politico notes, could be an allusion to Sarah Palin recently affirming her support for Sarah Steelman, the candidate she supported in the primary race. Saying Akin should step aside, Palin, in an appearance on Fox News, mentioned a third-party candidate as a possibility in her overall goal of taking back the Missouri seat (and, in the bigger picture, the Senate).