Huh? No, Frank Luntz Does Not Want To Kill Obama And, No, He Shouldn’t Be Fired For His Dumb Joke

Huh? No, Frank Luntz Does Not Want To Kill Obama And, No, He Shouldn’t Be Fired For His Dumb Joke 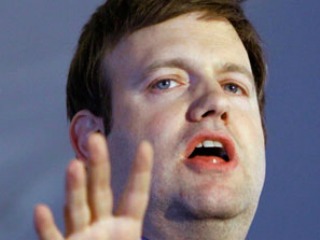 Earlier today, my colleague Tommy Christopher wrote a column about a comment Fox News analyst Frank Luntz made at a campaign event for Rick Santorum. Now, as Tommy himself pointed, he’s not usually in the habit of calling for “speech firings,” but he felt that a joke Luntz made during the event should result in Fox News “seriously consider[ing] unloading Luntz.”

The joke in question? Yeah, it’s pretty awful. Here it is, in context:

And I want your forgiveness here, because normally I get up and I crack jokes. Like when I came into Grand Rapids, I stopped at a McDonald’s… Did you see that they all have that new Obama Happy Meal? Order anything you want and the guy behind you has to pay for it. Or I would stand up here and tell you that I actually have a “Run, Barack, Run” bumper sticker. But I put it on the front of my car.

My colleague believes the second joke — about the bumper sticker — “is about the application of deadly force to the President” and that “making such a joke about our first black president carries with it an added layer of sickness, intentional or not.”

To which I say, with all due respect: Come on. Really?

The joke is not about literally getting into a car, revving it up, and using it to kill the President of the United States of America as he runs for his life. It’s about not liking Barack Obama, pure and simple, and using wordplay and hyperbole to convey that message. This is akin to how someone saying “take my wife, please!” (or, if it please you, “Take my husband! Now.”) is not literally asking for his or her spouse to be taken away. The joke is about frustration with one’s partner, and it uses wordplay and hyperbole to express that.

It’d be a mistake to apply a literal interpretation to a deliberate attempt at playing with language. That’s just not the way our language works; that’s not the way humor (or, you know, attempts at humor) function.

Also? This joke is not making a statement about black people or the history of black Americans. It does happen to be about a person who is black. And conflating those two realities does absolutely nothing to combat racism or encourage serious, productive, meaningful discussions about racial injustice.

Now, was Luntz’s joke highly disrespectful to our nation’s leader? Absolutely. Was it in poor taste? Definitely. Does it, ultimately, make Luntz look unprofessional? I would say so, yes. His joke reflects poorly on his employer, undermines his position as a trustworthy and respectable media personality, and, ultimately, is not doing Rick Santorum any favors.

I’m not particularly a fan of Frank Luntz. I’m also not a fan of the Obama administration, nor am I fan of most jokes about the Obama administration. But I am a huge fan of analyzing the people and events around us with an appreciation for nuance, an awareness of context, and a healthy dose of relativism. The world is not black and white. Let’s please not try to make it so.