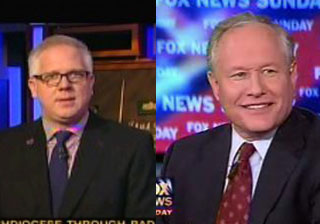 Glenn Beck‘s week-long explanation of the impending caliphate ready to strike Egypt has certainly struck a cord in the mainstream– left and right alike. The latest pundit to take a shot at him is the Weekly Standard‘s Bill Kristol, who, while expressing skepticism as to the ability of Egyptian protesters to non-violently enact change, is far more concerned with Beck’s “hysteria.”

Framing his latest piece, “Stand for Freedom,” around his respective agreements and disagreements with fellow conservative columnist Charles Krauthammer, Kristol notes that reasonable conservatives may disagree on the best solution for the Egyptian crisis and where America should stay, diplomatically, in regard to the struggle. But Beck and those like him, to Kristol, have crossed a line:

But hysteria is not a sign of health. When Glenn Beck rants about the caliphate taking over the Middle East from Morocco to the Philippines, and lists (invents?) the connections between caliphate-promoters and the American left, he brings to mind no one so much as Robert Welch and the John Birch Society. He’s marginalizing himself, just as his predecessors did back in the early 1960s.

Beck is no stranger to conspiracy theorist comparisons, though Kristol distancing himself from Beck to not-agree with Krauthammer is an interesting tactic. And while Beck may be the only one mentioned by name in Kristol’s piece, he continues to target “talk radio hosts” in general, hoping that, no matter where on the issue they end up, they defend the people over the dictator– the Declaration of Independence taking the cornerstone position of his argument. Conservatives, he concludes, should adopt the principles of the American Revolution to the situation in Egypt, and appreciate that such violent revolts are sometimes necessary. This reference to the Founders and the founding documents, of course, hits at the core of everything that Beck stands for– as close to a personal shot as Kristol is going to get. Certainly, commentators will focus on the above-quoted paragraph as the “beef-starter” in the two-page essay– and they have— if only for the John Birch Society reference, but it’s truly the framework that pits Beck on the opposing side of the Founders that will rattle him and, should he choose the respond, the part of the piece he would most likely attempt to debunk.