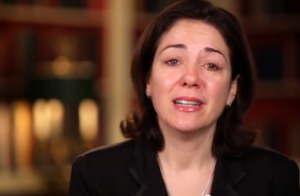 This morning, for the first time since January 2009, someone other than President Barack Obama or Vice President Joe Biden delivered the weekly address from the White House. At the specific request of the administration, Francine Wheeler, who lost her 6-year-old son Ben in the Sandy Hook Elementary School shooting, taped the speech Friday. Her words were an emotional, and sometimes tearful, plea to the Senate to finish what they started this week and pass a substantial gun safety bill.

Sitting beside her husband, David Wheeler, the grieving mother began by saying, “As you’ve probably noticed, I’m not the President.” She shared personal details about her family and broke down in tears when she reached these words: “Our younger son, Ben, age six, was murdered in his first-grade classroom on December 14th, exactly 4 months ago this weekend.”

Only towards the end of the four and a half minute address did Wheeler turn to the political action at hand. “We have to convince the Senate to come together and pass commonsense gun responsibility reforms that will make our communities safer and prevent more tragedies like the one we never thought would happen to us,” she urged. Discussing the cloture vote that occurred Thursday, she said, “that’s only the start. They haven’t yet passed any bills that will help keep guns out of the hands of dangerous people. And a lot of people are fighting to make sure they never do.”

“Now is the time to act,” she said, echoing a phrase often heard from President Obama. “Please join us. You can talk to your Senator, too. Or visit WhiteHouse.gov to find out how you can join the President and get involved.”

Already, voices on the right are accusing President Obama of “playing politics” and using the Wheelers as “props” or “pawns.” But if you watch the video and listen to her words, it’s clear to see that Francine Wheeler does not have some secret agenda. She is simply trying to do whatever she can to prevent other parents from going through what she has had to endure.

Some of the major objections put forward by the nation’s most vocal gun advocates over the last weeks and months include the argument that the proposed measure wouldn’t stop another Newtown from happening and that they punish law-abiding gun owners. On the first point, Wheeler and other people who have been personally touched by gun violence know that the measures being debated in Congress won’t stop every deranged shooter hell-bent on killing innocent people. But if expanding background checks can prevent a few people from getting guns who shouldn’t have them and limiting magazines can reduce the number of deaths in some instances, she and others believe that it’s worth it to try.

As for “law-abiding gun owners,” what rights are really being infringed upon? At the very least they would have to submit to a background check if they want to buy a gun from a private seller at a gun show or over the internet. And at most they would have to figure out a way to hunt or defend themselves with 10 bullets at a time instead of 30. Gun advocates also point out how easy it is to change clips in seconds, so that shouldn’t be too difficult for responsible, experienced gun owners to handle.

The bottom line is that the new gun legislation isn’t perfect and won’t erase gun violence in this country, but it has the potential to prevent shootings and save lives and if it is all our Congress is capable of compromising on, then it’s better than nothing and should pass. Nobody is proposing taking anyone’s guns away and the precious Second Amendment will remain completely intact.

All Francine Wheeler is really asking, for now, is that we do the bare minimum to prevent more senseless shootings in America. “I’ve heard people say that the tidal wave of anguish our country felt on 12/14 has receded,” she said, in one of the more affecting passages of her speech. “But not for us. To us, it feels as if it happened just yesterday.”