IRS Scandal Just Tip Of Iceberg: Agency’s Been Politically Targeting For Decades, Under Both Parties

IRS Scandal Just Tip Of Iceberg: Agency’s Been Politically Targeting For Decades, Under Both Parties 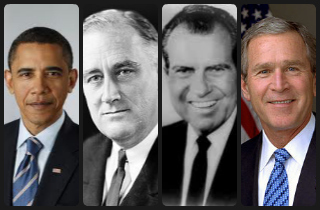 Republicans and much of the political press seem united in outrage over the recent revelations that the Internal Revenue Service targeted conservative “tea party” groups for additional tax status scrutiny during the 2012 election cycle, in what many are calling a deliberate act of political harassment. It is pleasing to see broad condemnation of what can only be interpreted as governmental abuse of power, but in order to move forward with better policy, partisans on both sides need to realize: This instance of IRS harassment is nothing new.

The indispensable libertarian journalist James Bovard pointed out in the Wall Street Journal this morning that since its inception, the IRS has often used its enormous power and information-gathering skills for explicitly political ends.

Bovard explained how President Franklin D. Roosevelt, often revered as a hero by political progressives, used the tax collecting agency to pester those who opposed his enormous expansion of the federal government under the New Deal. During his three-and-a-half terms as president, the Roosevelt IRS took swings at anti-New Deal publishers like William Randolph Hearst and political rivals like prominent Republican Andrew Mellon and radical populist Huey Long.

Naturally, the fun didn’t end there. Another beloved president, John F. Kennedy later “raised the political exploitation of the IRS to an art form,” Bovard wrote, by launching an Organizations Audit Project that specifically targeted right-leaning groups like the American Enterprise Institute and the Foundation for Economic Education.

Bovard notes how Republican President Richard Nixon later picked up where Kennedy left off: “More than 10,000 individuals and groups were targeted because of their political activism or slant between 1969 and 1973, including Nobel Laureate Linus Pauling (a left-wing critic of the Vietnam War) and the far-right John Birch Society.” In the 1990s, Bill Clinton‘s IRS was found to have audited many conservative groups that were named in a White House report on groups and individuals critical of the Democratic president.

Was this current administration the next big culprit in line? Nope. Salon’s Alex Seitz-Wald points out that Obama’s predecessor, Republican George W. Bush, oversaw a great deal of IRS political harassment of left-leaning groups that criticized the administration. Progressive churches were targeted for their “political” sermons against the Iraq War while conservative pro-Bush churches were left alone under the same rules. Bush’s IRS also deliberately targeted Greenpeace, the NAACP, and other progressive NGOs.

During the Bush era, Rep. Walter Jones (R-NC) was one of the very few Republicans to call for an investigation into the fishy auditing practices of the IRS (leaving Ron Paul aside as the obvious example, given his belief in abolishing the agency altogether). Only now that their own organizations have been targeted during the Obama era, it seems as though the rest of the conservative movement has come around to sensing the urgency about the easily-abusive practices of an ever-expansive agency.

One can only hope this represents a sea change in politics, with partisans on both sides keeping a wary eye on the Internal Revenue Service, regardless of whether their own party is in power. But let’s not hold our breath. Especially when the real question about the IRS will likely never get asked in Washington:

Why do we have this selective 501(c) tax policy in the first place?

When you have a system in which bureaucrats evaluate the tax-exempt status of organizations based on easily-manipulated criteria, it’s the exact sort of policy that lends itself to the powerful playing favorites depending on political whims.