Is Social Media Humiliation A Good Way For Modern Parents To Punish Their Children? 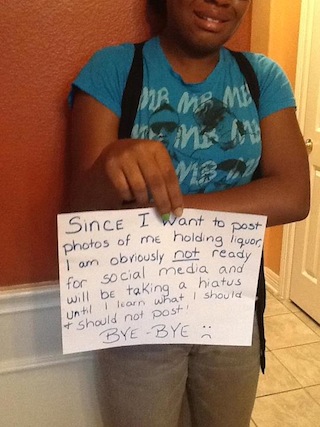 Here’s an interesting debate. Currently, one of the hottest posts on Reddit is titled “More parents need to do this!!!”. It shows a picture of a young girl who appears to be crying and is holding a sign explaining that, since she posted pictures of herself with alcohol, she is being grounded from from social media. While the backstory isn’t clear, the implication is that a parent saw the girl with alcohol in a picture on Facebook or some other site, grounded her from social media, and uploaded that picture as a kind of humiliating punishment. The post has quickly inspired a fiery debate between those that view the punishment as a great idea and others that view it as some kind of “emotional abuse.”

Here’s the full quote from the sign the girl’s holding:

“Since I want to post photos of me holding liquor, I am obviously not ready for social media and will be taking a hiatus until I learn what I should & should not post! BYE BYE :(“

The Reddit audience has mostly fallen into two categories; those like user Jeffyfox who wrote “Finally! Some parents with some ingenuity.” and those like user Dontdieman who wrote “Humiliation and shaming is not a way to teach a child in my eyes.”

Now, I may be one of the least qualified people to speak on this issue. I’m too young to have a teenaged child but too old to have social media affect my high school years too much. However, even I can tell that there are merits to both sides.

It’s been clear for years now that the digital skeletons in people’s online closets will be a huge concern for current young people and the generations to come. Every day there seems to be a new story about young people fired for a dumb tweet or a teenager charged with breaking child pornography because they were sexting. It seems to me that we’re heading towards one of two futures, one in which everyone has so much virtual baggage that none of it really matters or one where people go to increasingly desperate lengths to hide from their past. Consider the theory of Google CEO Eric Schmidt who said that it will soon be common place for kids to change their names once they reach adulthood or hiring age.

Until we reach either of those futures, however, kids need to learn the importance of a clean online image and a social media shaming seems to be a pretty effective tool.

To make things more interesting, it appears that this kind of online punishment is not just being used to punish online infractions. Just a couple weeks ago, an Ohio mother made headlines for posting a big red “X” over the mouth of her daughter’s profile picture when the girl was talking back. When people started asking whether that mother had gone too far, the daughter spoke to reporters and said she learned her lesson:

“I feel like I deserved it because I was mean to my mom and spoke disrespectful to her in front of my friends. Facebook is a big part of my social life and it’s how me and my friends find out what is going on and making plans and about school work and projects. It made me realize that I didn’t want my picture on there like that because all of my friends were asking me what happened and what I did. I told the people that asked me and my mom why that I spoke to my mom mean when she was doing nice stuff for me and my friends. I know my mom always makes sure I don’t get away with stuff like that and I was sorry.”

I can only imagine that more and more parents will begin employing similar techniques. Personally, I don’t have a problem with it. As long as the parents scrub these pictures once the punishment period is over, it seems to me to be a smart way to get through with kids. Teenagers may not listen to their parents, but they will always hate being embarrassed in front of their friends and this seems like a smart, modern way to do it.

Of course, like I said, I don’t have any kids myself. So, to the parents (or non-parents, or kids) out there, what do you think? Clever way to get through to today’s kids or a step to far?