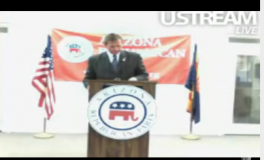 Yesterday, brought us media pundits stumbling through basic citizenship questions, today brings us John McCain nemesis J.D. Hayworth stumbling through basic U.S. history questions…sort of. Hayworth is making some headlines for telling an audience member at local GOP gathering that technically speaking the U.S. never declared war in Nazi Germany. Cue collective gasp (and a lot of Texas textbook jokes). But does he have any wiggle room? Here’s what he said in full in response to an audience member who remarked on how the U.S. no longer formally declares war in modern conflicts:

I would also point out, that if we want to be sticklers, the war that Dwight Eisenhower led in Europe against the Third Reich was never declared by the United States Congress…Recall, the Congress passed a war resolution against Japan. Germany declared war on us two days later. We never formally declared war on Hitler’s Germany, and yet we fought the war. [And later, when an audience member disagreed] I think we should check it. Perhaps we made the rationalization — since there was the Axis alliance — that the attack of Japan was tantamount to the attack of the Third Reich. But as I recall in my history, Germany declared war on the United States, not vice-versa.”

Hayworth is now attempting to split some hairs by saying he was referring to Roosevelt’s “message,” regarding Germany but the outcome, and the wording of the outcome, is the same. Probably in the future Hayworth should just stick with the basic facts and not attempt any frivolous interpretation. Video below.