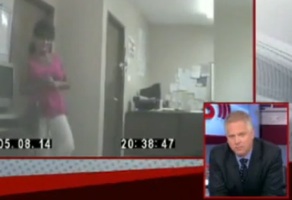 In perhaps the biggest bombshell of James O’Keefe‘s ongoing ACORN expose’ to date, Glenn Beck aired a tape of an ACORN worker confessing to O’Keefe’s hidden camera that she had shot and killed her husband. The tape is followed by Beck imploring his viewers to get up off of their couches, call their local newspapers, and demand that they run this story.

Be careful what you wish for, Glenn.

See, whether they got a phone call or not, Duane Gang and John Asbury of the Press-Enterprise did just that, except they did something that O’Keefe, Fox News, and Beck did not do. They got the facts. Here’s my very favorite part of their story:

Police said they have been in contact with (the woman in the tape) Kaelke’s former husbands and the homicide claims do not appear accurate.

Unless they contacted one or both of them by seance, that appears to be an understatement. Kaelke told the reporters that she made the story up, saying “”They were clearly playing with me…I decided to shock them as much as they were shocking me.”

An ACORN representative said that O’Keefe’s tapes were selectively edited, a claim echoed by O’Keefe’s other subjects.

This is exactly what I tried to explain on the Ed Morrissey Show yesterday, that the type of journalism that O’Keefe is engaging in lacks any checks or balances on his desire to reach a pre-ordained conclusion. Luckily, the charade was short-lived, in this case.

Here is the video as it was broadcast on Glenn Beck (the “admission” starts around the :56 mark):