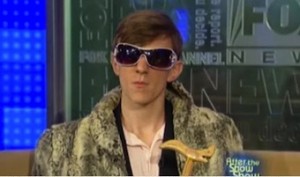 Conservative Project Veritas auteur James O’Keefe, last seen upsetting deceased veterans’ widows, has published a new undercover “investigation” that he claims shows “the ease in which individuals may register to vote for themselves or others without identification requirements of any kind” in Minnesota. Progressive blogger Brad Friedman explains why, even if true, it hardly matters. Mediaite explains that it isn’t even true.

In his latest video, O’Keefe operatives secretly tape Minnesota election workers explaining how they can register people like “Timothy Tebow” and “Thomas Brady” to vote by mail, without showing any ID, and how easy it is for someone to obtain an absentee ballot under false pretenses. If you can stand the idiotic smugness (heh, heh, Tim Tebow! Thomas Brady!), check it out, and pay attention to the questions O’Keefe’s operatives ask:

The premise of O’Keefe’s investigations into “voter fraud” is that it’s easy for someone to fraudulently register to vote, and consequently, to cast fraudulent votes. The idea is that the only way to preserve democracy is to enact strict voter ID laws that have the added benefit of disenfranchising millions of voters who tend to vote Democratic. The Brad Blog‘s Brad Friedman, who makes a habit of dismantling O’Keefe investigations, explains why, even if you accept everything O’Keefe’s video says as true, such laws wouldn’t help at all:

1) While one can indeed register to vote (in most places) without showing an ID via third party, what O’Keefe fails to mention in his video, is that the federal Help America Vote Act (HAVA) of 2002 already requires those who do not register in person to provide ID when voting for the first time at the polling place. In other words, if “Thomas Brady” registers to vote via the registration forms received via O’Keefe’s video, he would be required, by federal law, to show an ID the first time he votes in person at the polling place. That is already federal law. O’Keefe must have forgotten to mention that in his latest “Voter Fraud Investigation” video.

2) To work around the above point in order to commit voter fraud, one could, after committing a felony by fraudulently filling out a voter registration form, go ahead and commit another felony by voting via absentee ballot without having to show an ID, as also discussed in the video (at least in states which allow easy, “no-excuse” access for that type of voting.) It would, indeed, be possible, in this way, to commit voter fraud, if one wished to risk the very high penalties for committing yet another felony. What O’Keefe fails to mention in his video, however, is that the polling place Photo ID restrictions that Republicans have been pushing for, and which this video is obviously meant to support, would do nothing to prevent this absentee voter fraud!

Friedman explains that he’s “currently on the road and don’t have enough time for his idiocy as is,” so I generously made time for this idiocy, and found out that even O’Keefe’s absentee scenario is false. According to Minnesota election law, anyone registering by mail must either provide a verifiable driver’s license/state ID number, or the last four digits of their Social Security number. If those items don’t match state records, or if the registrant checks that third box, they are sent a notice informing them that they have to register using the same requirements as in-person registration. Those requirements are:

(1) presenting a driver’s license or Minnesota identification card issued pursuant to section 171.07;
(2) presenting any document approved by the secretary of state as proper identification;
(3) presenting one of the following:
(i) a current valid student identification card from a postsecondary educational institution in Minnesota, if a list of students from that institution has been prepared under section 135A.17 and certified to the county auditor in the manner provided in rules of the secretary of state; or
(ii) a current student fee statement that contains the student’s valid address in the precinct together with a picture identification card; or
(4) having a voter who is registered to vote in the precinct, or who is an employee employed by and working in a residential facility in the precinct and vouching for a resident in the facility, sign an oath in the presence of the election judge vouching that the voter or employee personally knows that the individual is a resident of the precinct.

So, if O’Keefe wants to register Tim Tebow to vote in Minnesota by mail, he needs to either create a CIA-worthy document trail for him, featuring a valid, verifiable state ID number or Social Security number. Otherwise, fake Tim needs to show ID, or get another registered voter in that precinct to swear (and sign) an oath before an election judge, under penalty of fine and imprisonment, attesting to the identity of the bogus Tebow. That’s quite a bit different from O’Keefe’s claim of “without identification requirements of any kind.”

The truth is, submitting fake voter information is easy, but successfully registering fake people is incredibly difficult, and casting fake votes is even harder. Doing either of them enough times to affect the outcome of an election is a near-impossibility, and certainly not worth the penalty.

Passing a law that imposes a requirement that many of your opponent’s supporters don’t meet, however, is effective, and when you get people to believe garbage like this, downright simple. It’s easy to vote for other people to go get something that you already have.