Janay Rice, who was seen being punched out by her then-fiancé Ray Rice in a video released by TMZ yesterday, posted a message to her Instagram account Tuesday morning denouncing the media for costing Rice his football career and making her “relive” the assault just to “gain ratings.” It’s her first statement since the release of the video.

Rice was cut from the Baltimore Ravens and suspended indefinitely by the league after the video surfaced yesterday; he had previously been suspended only two games. Janay married Rice earlier in the summer and declined to press charges against him for the February assault in an Atlantic City casino elevator. 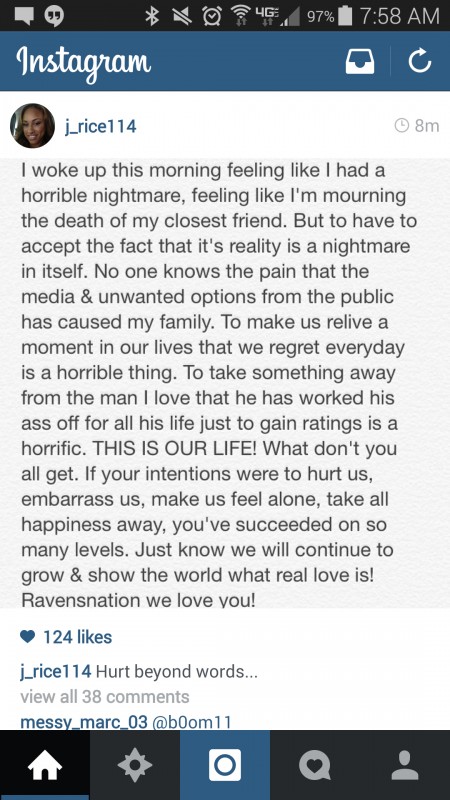 “I woke up this morning feeling like I had a horrible nightmare, feeling like I’m mourning the death of my closest friend. But to have to accept the fact that it’s reality is a nightmare in itself. No one knows the pain that hte media & unwanted options from the public has caused my family. To make us relive a moment in our lives that we regret every day is a horrible thing. To take something away from the man I love that he has worked his ass of for all his life just to gain ratings is horrific.

“THIS IS OUR LIFE! What don’t you all get. If your intentions were to hurt us, embarrass us, make us feel alone, take all happiness away, you’ve succeeded on so many levels. Just know we will continue to grow & show the world what real love is! Ravensnation we love you!”

The Baltimore Sun confirmed the authenticity of the message.