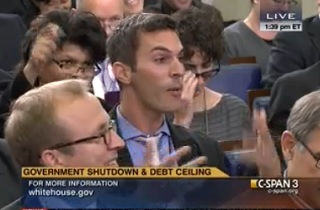 It was bound to happen sooner or later, but at Thursday’s White House Daily Briefing, the Jenga tower of metaphors that have been used to describe the current government shutdown/default crises came tumbling down at the jittery hand of a confused press corps. In responding to Speaker of the House John Boehner‘s offer of a short-term debt limit increase, Press Secretary Jay Carney tried to make clear that the President won’t pay a ransom in order to have Republicans put down the matches and the gasoline on their nuclear missile, or something.

The questions at hand were whether the President would sign a short-term debt limit increase without a continuing resolution to reopen the government, and whether he would negotiate with Republicans if they passed a clean debt ceiling increase, but not a continuing resolution to reopen the government. The short answers are, it appears, “yes” and “no,” but in his caution to insulate his answers to hypotheticals, Carney seems to have used one too many metaphors for the assembled reporters.

“From your discussions with the first row,” USA Today’s Peter Jackson quipped, my takeaway is the President is open to a short-term of raising the debt limit, even if he does not get a clean CR. Is that correct?”

“Can we just use the yes?” Jackson asked.

From there, the briefing devolved into open revolt over the use of competing metaphors, with reporters talking over each other, Ari Shapiro ticking off several of the metaphors that have been used, and Carney lamenting “You guys are just too literal, then. It’s the closing of the American mind, and failure to appreciate metaphor and simile.”

“You’re asking me lot of questions based on a bill that doesn’t exist, and may not exist, and doesn’t even reflect what the Speaker of the House and his colleagues discussed a few hours ago,” Carney said, explaining his reluctance to nail down every possible response. “I think we ought to see whether they’re serious about, you know, putting the matches and the gasoline aside when it comes to threatening default. If they’re serious, we’ll evaluate what they moved forward on. What the president has been crystal clear about all along is it’s unacceptable to him that the Republican Party, driven by the Tea Party caucus, try to extract ideological objectives in exchange for opening the government and raising the debt ceiling.”

“So your position is that until then, you’ll continue to obfuscate?” cracked Bill Plante.

“I wish we knew,” Carney replied with a laugh. “I think there is nobody who has followed the machinations in the last several weeks, and you might argue the last several years, who knows whether they’re going to do the right thing for the American people and open the government.”

Carney went on to explain that the President “said Congress should do both,” pass a clean CR and a debt limit increase, and “If they do one thing, that’s a good thing, but he’ll still insist they do the other.”