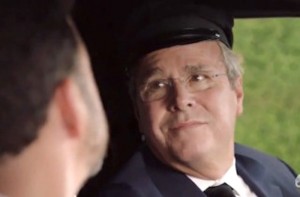 Kimmel was getting a ride to the event with James Corden, but he got kicked out of the car when his singing didn’t live up to the Carpool Karaoke standard. With no other choice, Kimmel tried to hitchhike a ride from Selina Meyer‘s motorcade, but even though she didn’t let him into her limo, the driver shouted there was room for Kimmel up front.

Kimmel was surprised to find Bush was driving the car, though the one-time GOP hopeful explained that his new gig is just something to do while he’s in between jobs.

Kimmel told Bush he was nervous about his chances of winning the award for Outstanding Variety Talk Series, but the former Florida governor told him not to worry.

“If you run a positive campaign, the voters ultimately will make the right choice,” Bush said.

Unfortunately for Kimmel, Bush was just joking around, and he kicked him out of the car as well.

Hey, @jimmykimmel, I'm giving you 5 stars! How about a little something,
you know, for the effort, you know? https://t.co/tsm5fZ1aDW