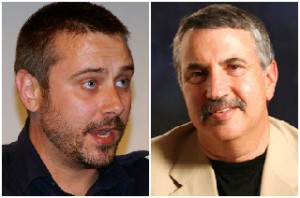 The Nation‘s Jeremy Scahill, whose documentary Dirty Wars opened last week, has been one of the toughest critics of President Obama‘s counterterrorism policies. On Thursday, that criticism extended to The New York Times columnist Thomas Friedman who defended the NSA surveillance programs this week.

In his column, Friedman accused those who have defended NSA leaker Edward Snowden of “behaving as if 9/11 never happened” and believing that “the only thing we have to fear is government intrusion in our lives, not the intrusion of those who gather in secret cells in Yemen, Afghanistan and Pakistan and plot how to topple our tallest buildings.” He urged Americans to accept the current restrictions on privacy because “one more 9/11-scale attack gets through, the cost to civil liberties will be so much greater.”

Scahill was asked to respond to Friedman’s arguments on HuffPost Live yesterday and delivered a scathing rebuke of the columnist. “Thomas Friedman as usual is living in La-La land with his ideas about how the world works,” Scahill said. “He should stop hanging out in taxi cabs and talking to concierges and actually listen to the whistle blowers that are coming forward and really painting a devastating picture of an out of control national security state.”

Continuing his criticism of Obama, Scahill said, “this White House is trying to create a policy where it only wants official leaks.” By condemning the NSA leaker and organizations like WikiLeaks, Scahill warned that these “official leaks” will be “the only information that journalists have access to. That really undermines the notion of a free press and a democratic society.”

While Scahill admitted that it’s fine to trust that Obama will not abuse his power, “he’s created an infrastructure where you have someone like a President Jeb Bush, or Marco Rubio, or, god forbid a Sarah Palin in office, and what are they going to do with that very same surveillance state?”