Jihadists to Boko Haram: Look, Even We Don’t Kidnap Schoolgirls

Jihadists to Boko Haram: Look, Even We Don’t Kidnap Schoolgirls 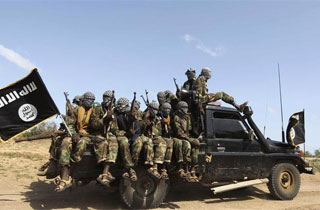 Islamic militants are scrambling to distance themselves from the recent acts of the African militants Boko Haram, expressing their unease with the news that Boko Haram orchestrated mass kidnappings of schoolgirls to sell into marriage — and according to the New York Times, al Qaeda, which has maintained an “awkward” relationship with the increasinly unstable Islamic group, has yet to issue a statement condoning their actions.

“Such news is spread to taint the image of the Mujahedeen,” wrote one dubious poster on a web forum used by Islamic militants whose administrator uses a picture of Osama bin Laden…

“There is news that they attacked a girls’ school!” another astonished poster wrote on the same jihadi forum, suggesting delicately that Boko Haram may perhaps be killing too many noncombatants instead of armed enemies. He prayed that God would “hold them steady to the path” of Islam.

And if you think al Qaeda is bad, the violent tactics of Boko Haram “makes Al Qaeda look like a bunch of schoolgirls,” Bronwyn Bruton, an Africa scholar at the Atlantic Council in Washington, told the Times.

Though al Qaeda and Boko Haram used to share a close relationship, their relationship began to weaken in 2010, when Abubakar Shekau, a man who claims that he can speak directly to God and is widely described as “charismatic,” took control of Boko Haram and began implementing indiscriminately violent tactics against civilians, such as assassination via motorcycle.