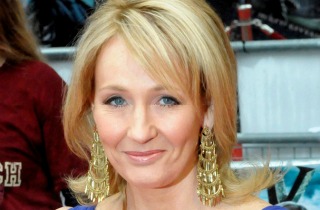 Harry Potter author JK Rowling used the example of Hogwarts headmaster Albus Dumbledore to explain to her angry fans why she signed a letter opposing a boycott of Israel.

Rowling was one of 150 prominent British academics and artists to sign onto a letter opposing the Boycott, Divestment, and Sanctions movement, which aims to boycott Israeli culture, businesses, artists, and universities. “Cultural boycotts singling out Israel are divisive and discriminatory, and will not further peace,” the signees write. “Open dialogue and interaction promote greater understanding and mutual acceptance, and it is through such understanding and acceptance that movement can be made towards a resolution of the conflict.”

That angered some of Rowling’s more anti-Israel fans, who compared the Jewish nation to the evil Voldemort. So the author took to Twitter and used a scene from one of her books to explain her stance.

In Harry Potter and the Deathly Hallows, Dumbledore goes to a remote hilltop to meet in secret with Death Eater Severus Snape. “At that point, Snape is a subscriber to the inhuman philosophy of Voldemort. He is probably a killer, certainly a betrayer of two of the people Dumbledore loved most, and the man who had sent Voldemort after an innocent child in the knowledge that Voldemort would kill him,” Rowling notes.

“Dumbledore is an academic and he believes that certain channels of communication should always remain open,” she writes. “The course of my fictional war was forever changed when Snape chose to abandon the course on which he was set, and Dumbledore helped him do it.”

“Boycotting Israel on every possible front has its allure. It satisfies the human urge to do something, anything, in the face of horrific human suffering,” she concluded. “What sits uncomfortably with me is that severing contact with Israel’s cultural and academic community means refusing to engage with some of the Israelis who are most pro-Palestinian, and most critical of Israel’s government. Those are voices I’d like to hear amplified, not silenced.”