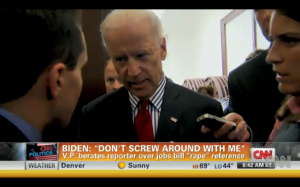 During an appearance on a panel at the University of Pennsylvania on Tuesday, Vice President Joe Biden defended President Obama‘s Jobs Act by explaining that the money injected into the economy would be used to increase police and teacher forces across the country, among other jobs. According to The Daily Pennsylvanian, Biden said that temporary cuts in police and education staffing aren’t something to be taken lightly:

Predictably, Biden caught some backlash for the comment. The London Telegraph’s Tim Stanley said that this latest gaffe should be the impetus for replacing Biden with Hillary Clinton on the 2012 ticket. “There’s a case for saying that Biden brings Irish toughness to a White House that often seems effete,” Stanley wrote. “But he has also contributed to its image of incompetence.”

Undeterred, Biden went to Flint, Michigan, and brought up the rape statistics again, drawing a correlation between the dwindling number of police officers and the rising murder and rape rates, using statistics given to him by the Flint police department:

After his talk, Biden was asked to pose for a picture with what appeared to be a fan. It turned out that the “fan” was ambusher Jason Mattera, who turned on the Vice President and launched into a line of questioning about Biden’s use of the “rape” term in his speech before being launched into a wall by his handlers:

Mattera has been told to “get a life” by a member of Congress and even caused Bill O’Reilly to come to Al Franken‘s defense. Our own Tommy Christopher has a running feud with him.

Still, no matter which way you lean, there are two things that stick out here:

1. Biden’s comments aren’t really that big of a gaffe. Yes, he does put his foot in his mouth fairly often, but the points that he made weren’t that crazy. He was basically showing that as you cut police, crime goes up. Murder and rape are two issues that lead many crime reports. Biden has to make as compelling a case as possible to gain support for the job bill, and bringing up two harrowing sets of numbers helps the cause.

2. Jason Mattera’s ambush interviews don’t work if he gets schooled by the person asking him questions. In the Al Franken ambush, he didn’t let Franken answer, so he essentially shot himself in the foot. Here, he lets Biden answer and gets shut down by the statistics being thrown in his face. It’s not that the idea of the ambush interview is bad, and Mattera has to be at least given credit for getting close enough to these politicians to be able to ask the questions in the first place, but these things don’t work if you’re just going to make the subject look better when it’s through.

Enjoy the video of the confrontation — and the ensuing discussion — courtesy of CNN: