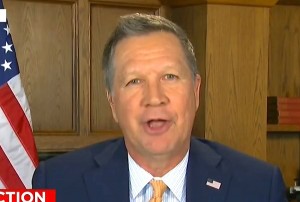 One of Ohio Governor and third-place Republican presidential candidate John Kasich‘s under-appreciated talents is his ability to make things really awkward, a skill that was on brilliant display on Monday morning’s edition of CNN’s New Day. Co-host Alisyn Camerota was trying to get Kasich, who has no shot at achieving the majority of delegates needed to secure the Republican nomination, to face the fact that his candidacy is nothing more than a spoiler for the two candidates ahead of him. Kasich responded with a loopy mockery of “mathematics” that was worthy of Sarah Palin:

Camerota: You said it would be hard for any candidate to get to the magic 1,237 number by the contest, but it is not impossible for Donald Trump. It is mathematically possible for him to get to that still, isn’t it?

His reference to floating around the moon is a complete mystery, but what he probably meant to say at the end there is that there have been ten contested Republican conventions.

Kasich wasn’t quite done yet, though. As Camerota wound up to ask her final question, Kasich jumped in to volunteer that politics is too focused on silly things like “votes”:

I want to tell you one other thing. In politics, people think the only thing that matters are votes, and fundraising. There is something else that matters in politics and that is giving people hope that America can be a better place. That matters, too. The message matters very, very much to people.

Kasich’s got a good point there, maybe there should be some mechanism in place for people to register their approval of a candidate’s message, some way of indicating, in a way that can be quantified and counted, that the message is important to them.