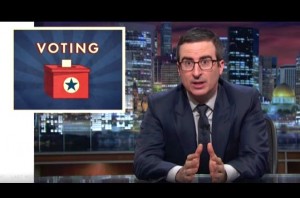 The third season of Last Week Tonight with John Oliver kicked off Sunday night on HBO, and the comedian wasted no time in tackling the American voting process with an acerbic bite. Bashing the states whose elected officials have long tried to implement strict voter ID laws, Oliver identified that the issue of carrying voting-approved photo identification often separates on racial lines. He joked, “It just seems like one of those things white people are more likely to have. Like a sunburn. Or an Oscar nomination.”

The issue of these ID laws centers on the increased steps voters must go through to receive sanctioned voting accessibility, a set of standards that limits the likelihood that people, particularly minorities, will pursue the process. Unsurprisingly, lower voter turnout tends to favor Republicans in both federal and local elections. Oliver skewered the limited hours that these offices are open for business in many communities, noting, “In Sauk City, Wisconsin… the ID office is open on the fifth Wednesday of every month, and in 2016 only four months even have five Wednesdays!”

Voter impersonation is ultimately the argument that is often cited by conservatives in this debate, the stance that one person may show up to a voting station to cast a ballot on behalf of someone else, “which is a pretty stupid crime,” the comedian admitted. Oliver continued, “You stand in line at a polling place, risk five years in prison… all to cast one, probably not-consequential extra vote. In terms of pointless crimes, it’s up there with forging a Bed Bath & Beyond coupon. It’s a lot of trouble with low reward.”

Check out the above video from HBO’s Last Week Tonight.