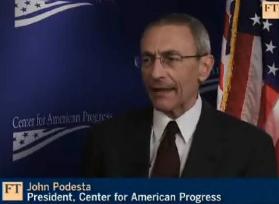 A very blunt assessment of the American political scene from a former Obama administration official is getting attention today.

John Podesta was asked by the Financial Times for his take on the “health” of American politics – and he thinks it “sucks.”

Podesta ran the Obama Administration’s transition team (and served as Pres. Clinton’s Chief of Staff), and now has returned to his job as founder and President of the Center for American Progress. He was interviewed by the Financial Times, in print but also on video, by Edward Luce, Washington Bureau Chief.

The 10-minute interview (below) had several interesting exchanges, but none will garner more attention than when Luce asked about “the condition, the health, of American politics at the moment,” and Podesta fired back immediately, “It sucks.” He was laughing – but it wasn’t because he was kidding. Apparently Evan Bayh isn’t the only one speaking out against Congress right now.

“It feels like a very frustrated country,” he said earlier in the interview. The clip has found its way on Fox News and MSNBC so far this morning (according to TV Eyes).

He also took a couple shots at the Tea Party movement, before acknowledging it came from an honest place. “There was something clearly real about that, and they tapped into a sense that exists that we saw play out over the weekend in the Tea Party Convention,” he said.

Like any former administration official speaking bluntly about the President, this is sure to gain attention. But the use of the word “sucks” just ensures it will be part of the news cycle. Here’s the interview: